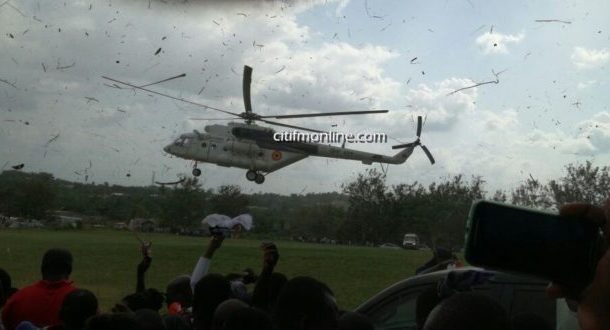 President John Dramani Mahama on Tuesday flew in a helicopter to inaugurate the Takorasi Community day Senior High School in the Denkyembour district of the Eastern Region. The inauguration forms part of activities planned to mark the President’s five-day campaign tour of the region. He is expected to tour more than 24 constituencies and introduce the various National Democratic congress (NDC) parliamentary candidates to residents. The President is also expected to explain his vision to the people of the region and convince them to renew his term for the next four years. Mahama has so far campaigned in the Western, Central and the Greater Accra Regions. Mahama’s helicopter tour not due to bad roads

The National Democratic Congress (NDC) in August 2016 dismissed suggestions by the New Patriotic Party (NPP) that President Mahama used helicopters during his tour of the Northern Region because of the deplorable state of roads in that part of the country.