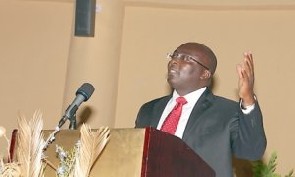 He says President John Mahama is “hoodwinking” Ghanaians by citing some supposed achievements when in fact he has achieved less relative to the amount of money borrowed for infrastructural projects.

“If you compare the sum the total cost of infrastructure expenditure from loans from taxes, and from grants from 2009 to 2016 it is less than $7 billion meanwhile the government has borrowed $39 billion,” she said, quizzing, “So where is the rest of the money?”

The astute Ghanaian economist made this disclosure during a public lecture held at the National Theatre under the theme “The State of the Ghana Economy – A Foundation of Concrete or Straw.”

At his campaign tours, President Mahama has described his achievement as unprecedented and unparalleled in the history of Ghana.

Government has detailed its achievements in roads, hospitals, schools, and tourism in its Green Book. This book serves as a reference point for government functionaries on campaign grounds.

Addressing some NDC supporters in the Western Region, President Mahama accused the NPP flagbearer, Nana Addo Dankwa Akufo-Addo, of sleeping on his campaign tour when he complained about poor road networks in the region.

He says the Managing Director of the International Monetary Fund (IMF), Christin Lagarde, has blamed Ghana for borrowing for consumption purposes.

Dr Bawumia says Ghana under President Mahama has suffered severe setbacks due to his penchant for “reckless” borrowing and mismanagement.

“Data shows as national income increase in 2001-2008 people at the bottom of the income scale became better off but since 2008 the worst economic decline has occurred during the tenure of President Mahama,” he said.