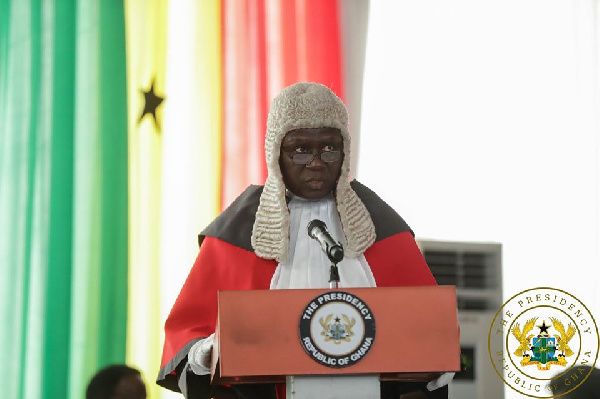 Member of Parliament (MP) for Bortianor Ngleshie Amanfrom, Sylvester Tetteh, has resented Ex-President John Mahama over his comments about the Chief Justice and the Judiciary, hence describing the statement as "unpresidential".

According to the former President, the image of the Judiciary is sinking so low that it has turned into a laughing stock publicly.

He therefore called for new Chief Justice in order to redeem the image of the judicial system.

“So badly has the image of our Judiciary deteriorated that many of our citizenry openly make mockery of our justice system and of our justices. The phrase ‘Go to Court’ is these days met with derisive laughter, instead of hope that one will truly get justice”.

“There is, therefore, the urgent need for the Ghanaian Judiciary to work to win the trust and confidence of the citizenry, and erase the widely held perception of hostility and political bias in legal proceedings at the highest courts of the land”.

“Unfortunately, we have no hope that the current leadership of our Judiciary can lead such a process of change. We can only hope, that a new Chief Justice will lead the process to repair the broken image that our Judiciary has acquired over the last few years,” Mr. Mahama said during the 2nd Annual Lawyers Conference of the opposition National Democratic Congress (NDC) held on Sunday, August 28, 2022.

In reply, Sylvester Tetteh challenged Mr. Mahama to openly tell Ghanaians exactly what the Chief Justice has done wrong for him to be removed.

According to him, Mr. Mahama is motivated to make such comments so as to incite people against the Chief Justice but warned that his utterances will have dire consequences on Ghana's Judiciary.

"It's an attempt to incite the public against the Chief Justice and we have to be careful of that . . . if you bring the leader of the Judiciary down, what it means you've run down the whole institution," he said.

He added that Mr. Mahama's statements are an insult to the intelligence of the citizenry.

"In 2012, when we went to the Supreme Court, these Judges were the ones who retained verdict for you. When they same Supreme Court and the same system rendered for another person, then they become bad people. I think it's unfair to the intelligence of all of us as Ghanaians."

The MP also fired shots at the lawyers who gathered at the conference asking why they declined to advise the former President on his utterances against the Chief Justice and the Judiciary.

He retorted; "The same Judiciary that he has no trust in, when we went for elections and he wasn't satisfied with it, he went to court. They gave him a fair hearing. Most of the NDC guys, they are in court. They go to court. They practice. They have their daily meals from it and all that."