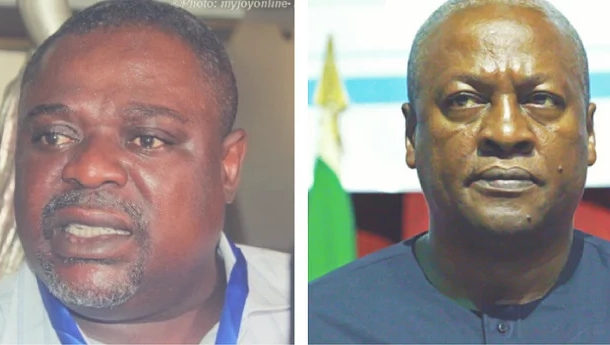 Deputy General Secretary of the opposition National Democratic Congress (NDC) Mr Koku Ayidoho has revealed that then Vice President John Mahama stood in the way of a probe into the ‘corrupt’ ‘co-efficient’ affairs of the Ghana Football Association (GFA) under Mr Kwesi Nyantakyi.

Speaking in an interview with GhanaWeb, Koku Ayidoho said he believes that there are some improprieties at the GFA which a proper probe would expose, but then Veep Mahama intervened on the side of Mr Nyantakyi.

“We thought that we had to look into GFA matters. This business where government is sponsoring football yet we can’t look into their affairs to me is quizzy.” He said.

‘The Bull’, as he is affectionately called by NDC supporters recalled that when the the NDC won power in 2008, he and a circle of sports enthusiasts key among them being Nii Lante Vanderpuye (former Sports Minister who clashed frequently with GFA), Kojo Bonsu and Kojo Twum Boafo, then close to the circle of power had began moves to institute probe into how the GFA was being run without proper accountability, but Mr Mahama, was reached by Kwesi Nyantakyi to intervene in the matter by speaking to President Mills, who upon intervention of his VP, warned his then ‘castle boys’ to “slow down on Kwesi Nyantakyi”.

“There was a typical issue that had to do with Kwesi Nyantakyi and the GFA. And some of us sports enthusiasts like Nii Lante, Kojo Bonsu, Kojo Twum Boafo at the time.. we thought that Kwesi Nyantakyi was doing something wrong and having come into power we needed to go into the FA as a government but I think somehow Kwesi Nyantakyi found his way to the Vice President John Mahama and the Vice President had a chat with President Mills. So the president asked us his boys to slow down on Nyantakyi”, he revealed.

“You heard about co-efficient… Come and render account you say coefficient… the co-efficient has to be looked into. They should explain it to us” he insisted.

He was responding to a question asked Ghanaweb’s Kwabena Kyenkyenhene Boateng (KKB) whether it was true he (Koku) out-muscled the then Vice President Mahama within the corridors of power.

He denied flatly. “Nobody disrespected Vice President Mahama at the time and he had his influence”, he said, drawing on the GFA President’s issue as just one example of cases where VP Mahama exercised his influence, insisting there was no way anyone would have said they rendered then VP Mahama redundant.