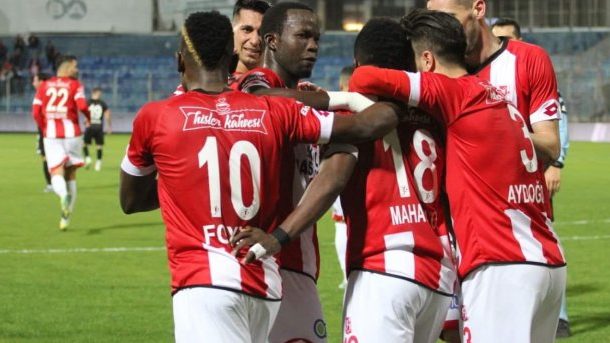 Ghanaian international striker, Mahatma Otoo scored registered his name on the Score-sheet  when his team Balikesirspor held Adanaspor to a 1-1 stalemate away from home.

The former Hearts of Oak captain shot his side into the lead in the 39th minute of the game after he was set up by team mate Serdar Guncu.

The home side Adanaspor restored parity in ehe  second half through midfielder  Hakim Cinemre.

The draw for Balikesirspor puts them on the 10th with 34 points after 26 matches.

After the game, the Ghana youth international took to Twitter to dedicate the goal to his late mother who died on Wednesday.
"I dedicate today’s goal to my mum, May Her Soul Rest In Peace. ????Red heartCrying face", Otoo tweeted.

The goal will serve as a morale booster for the former Ghana U23 striker after he lost his mother, Love Habibatu Ankrah.

Madam Ankrah who is affectionately called “Mama Love”, was rushed to the Dansoman polyclinic around 1:00am on Wednesday after complaining of illness.

She was later transferred to the trust hospital in osu after her case became critical.

She was unconscious when they got to osu so she was placed on oxygen till afternoon.

Unfortunately for Madam Ankrah, she was pronounced dead.

Love Habibatu Ankrah will be 55 this year and left behind 3 children including Mahatma Otoo.