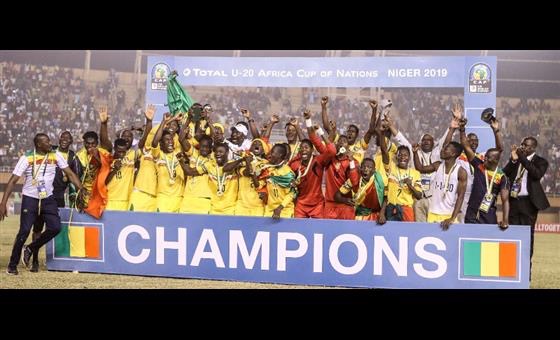 Mali beat Senegal 3-2 on penalties to claim their maiden Total U-20 Africa Cup of Nations title following a 1-1 stalemate after extra time in Niamey.

The Aiglons held their nerves in the pulsating shootouts to hand Senegal their third successive defeat in the final after losing 1-0 at home to Nigeria in 2015 and 2-0 to Zambia two years ago in Lusaka.

Traore’s well taken goal was the first time Senegal had conceded the first goal in the tournament.

The Aiglons missed a glories opportunity to extend their lead on 24 minutes Sekou Koita was played through in the box but his weak effort was parried away by Ndiaye.

Hadji Drame showed his slicked movements in the Senegalese half two minutes later when he combined with El Bilal but could only hit the side netting.

Senegal’s Les Lionceaux returned from the break with much determination to get back into level terms with the introductions of Ousseynou Niang and Amadou Ndiaye adding more sharpness in attack.

The duo combined to level the score on seventy-five minutes when Niang bust through the left to deliver a cross which was turned towards goal by Ibrahima Drame but the keeper fumbled it to Ndiaye’s path and the FC Metz wonder kid volleyed in the equalizer with a stylish overhead kick.

The two sides cancelled each other in the remaining minutes and extra time to force the much talked about final to penalties.

Senegal's Dion Lopy, Amadou Ndiaye and Ousseynou Niang were the unfortunate players to miss from the spot, giving Mali their first Under-20 title.

Senegal swept home the individual accolades after the final with defender Moussa Ndiaye named the Player of the tournament and Amadou Ndiaye bagging the leading goal scorer’s award.

Les Lionceaux were also awarded the Fair Play Award plus having four members, Moussa Ndiaye, Dion Lopy, Ibrahima Drame and Youssouph Badji in the team of the tournament which is coached by Youssou