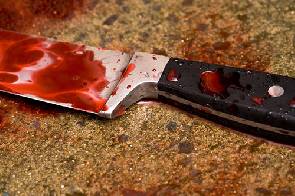 A 24-year-old man identified as Kwabena Tawiah has been beaten to pulp by angry youth at Assin Akrofum for allegedly chopping off his 60-year-old father’s hand.

The accused is purported to have also inflicted injuries on one of his neighbours Papa Asare who attempted to rescue his father Kwabena Amankwaa from being butchered.

Tawiah was attacked by the irate youth in the village on Saturday when he was spotted inflicting multiple wounds on his father over what is yet to be known.

The accused who was nearly lynched is receiving treatment at St.Francis Xavier Hospital, Assin Fosu together with the other victim, but his father whose condition worsened has been transferred to Cape Coast Interbertin Hospital.

The police have started investigations into the matter.