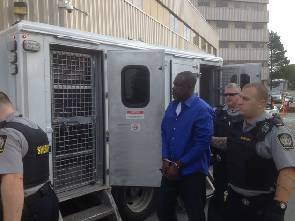 'You're not the type of person we want in Canada,' judge tells Mr. Acheampong

A 58-year-old man from the West African nation of Ghana will have an extended stay in Canada after accepting responsibility Friday for child pornography found on his cellphone as he entered the country.

Thomas Aboagye Acheampong was arrested Monday at Halifax Stanfield International Airport after arriving on an Air Canada flight from London.

Acheampong told a Canada Border Services Agency officer he planned to visit for 17 days but gave inconsistent answers when pressed for details.

During a secondary examination, a border officer discovered three videos on Acheampong’s cellphone showing children having sex with one another.

Crown attorney Perry Borden told Dartmouth provincial court the six children in the videos appeared to range in age from five to 13.

Judge Timothy Gabriel accepted a joint recommendation from lawyers and sentenced the Ghanaian national to eight months in jail on each count, with the time to be served concurrently.

Acheampong will almost certainly be deported after he gets out of the Central Nova Scotia Correctional Facility in Dartmouth, the judge said.

“If it wasn’t for people like you, sir, who possess this kind of material, there would be no incentive for the monsters doing this to the children,” Gabriel told the offender. “And you’re bringing it into Canada!

The judge said the aggravating features were “too many to mention” and deserved strong condemnation.

“No society in the world accepts this kind of conduct,” Gabriel said. “I don’t purport to speak for all of them, but I speak for Canadian society. We don’t tolerate it and we punish it severely.

“We express society’s revulsion and contempt for individuals who participate in that kind of activity, and the sentence must reflect that.”

He said the only mitigating feature was the early guilty plea, which saved the court some time.

Borden said he asked for more than the minimum sentence of six months for possession of child pornography because Acheampong had a previous conviction in Maryland in 2004 for conspiracy to traffic heroin.

“So he’s not coming to court with clean hands,” the prosecutor said.

The judge also ordered Acheampong to provide a DNA sample for a national databank and register as a sex offender for 10 years.