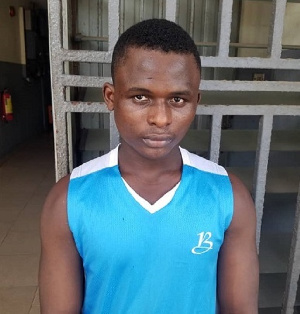 An Accra circuit court has jailed a 21-year-old head porter for 17 years in hard labour for attempted robbery and causing harm to a fire officer.

Daniel Amevor, convict, appeared before the court for attempting to rob a Ghana National Fire Service (GNFS) personnel of his mobile phone and money at knifepoint.

The court presided by Justice Afia Owusuaa Appiah found Amevor guilty for attempted robbery and causing unlawful harm and sentenced him to 17 years in hard labour for robbery and five years for causing harm. The sentences are to run concurrently.

The Head of Public Relations Officer of the Accra Regional Police Command, Deputy Superintendent of Police (DSP) Effia Tenge disclosed these to the Ghanaian Times in Accra.


She said the victim was accosted by the convict and an accomplice, Abodie, now on the run, to surrender his mobile phone and money, in front of the GNFS Training School, in Accra.

DSP Tenge stated that in the process Amevor slashed the victim, who screamed, which alerted other colleagues, who came to his rescue.

She said the convict and the accomplice took to their heels, but the GNHS personnel arrested Amevor and handed him over to the police, while the victim was rushed to the Korle-Bu Teaching Hospital.