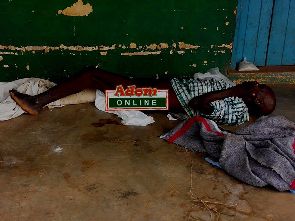 A man in a very feeble condition, with one leg rotting has been dumped by unknown persons at Nyohani Rehabilitation Center near Tamale.

He is reported to have been dumped on Monday around 8:00pm.

Some worried residents who spoke to Adom News’ Illiasu Rauf said they do not know where he came from.

They only woke up on the dawn of Tuesday to find the man lying helplessly on the floor.

“On Monday around 8:00pm, we saw a pickup entering here but we didn’t know what it came purposely to offload. He was lying there like a statue; some thought he was even dead” one resident said.

“We don’t know who dumped him here but we are pleading with anyone who can aid us to come forth. The man is really suffering. He is not responding to food neither is he portraying any gesture that shows he’s communicating.

“It’s very disturbing and pathetic. Anyone who has any idea who he is or any of his family members should please assist us help this poor man” another resident worriedly noted.