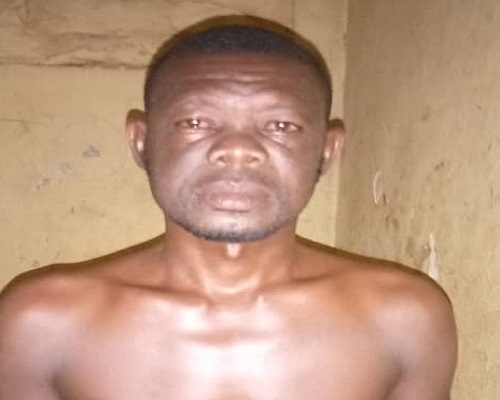 According to prosecution led by Sergeant Samuel Owusu, they were not ready to take the plea of the accused as investigations are still underway and prayed the court presided over by Her Worship Cynthia Blagogee to remand the accused in Police custody.

The 42 year old mason by name Samuel Obeng alias Kwaku Panyin killed his own mother in the early hours of Monday 21st December,2020 with a pair of scissors.

The accused person Samuel Obeng  lived with his now deceased mother in Yayo a suburb of Asamankese in the Lower West Akim Municipal of the Eastern Region.

Samuel Obeng an avid drunkard lived alone in the same vicinity in Yayo, a suburb of Asamankese but his late mother now deceased told him to vacate his rented apartment and live with her so she can monitor her incessant drinking habit.

On Monday 21st December,2020 around 1:30 am at dawn the deceased woke up with the pretext of attending nature's call but his late mother knew he wanted to go out and booze.

The late Comfort Ayede told the accused to attend nature's call in a chamber pot and will dispose it off later but he declined.

She later locked the door and prevented the accused from going out, Samuel Obeng became furious and picked a pair of scissors which was lying on a sewing machine and stabbed her countless times on her right chest.

Sensing he had killed her mother, the accused fled but was later arrested by the Asamankese Police.

She was rushed to the Asamankese Government Hospital where she was pronounced dead on arrival.

The body has now been deposited at the Police Hospital morgue awaiting autopsy while the accused has been remanded in prison custody to reappear in court on 28th January,2020.