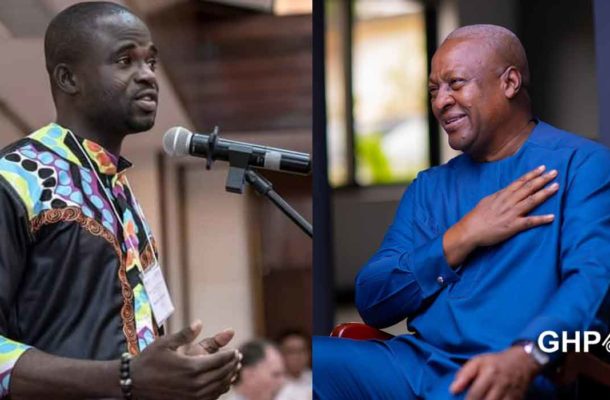 When I heard you declare that the 2024 presidential and parliamentary election would be “a do-or-die” affair, I was shocked. I was equally shocked that those who spent the last decade defending and justifying Akufo-Addo’s declaration of the 2012 election as an “all-die-be-die” affair are fuming and foaming at their twisted mouths in condemnation of your statement.

Surprisingly, those who called Akufo-Addo a warmonger because of that statement are shamelessly defending you. You shouldn’t be happy with such support.

Besides the political extremists of the NDC and NPP, there is a conscionable minority that has the nation at heart and will look at things from the right perspective. I want you to look at your words from that perspective.

I heard you explain that what you said was an idiomatic expression. You’re a communicator, and I know you are well aware that the words we speak have denotative and connotative meanings. To the average angry and desperate party fanatic on election day, a “do-or-die” charge at the polling station is a vague and deadly war chant. Your idiomatic expression could be heard as an idiotic expression and translated into violence.

John Mahama, elections should not be a “do-or-die” affair. Akufo-Addo contested and lost the 2008 and 2012 presidential elections. He did not die. He came back to win the 2016 and 2020 elections.

You contested and won the 2012 elections with barely four months of campaigning in a funeral cloth. You then lost the 2016 and 2020 elections. You’re not dead.

In fact, you have a better chance of winning the next election than the last two. Even if you lose, you will not die. And Ghana must not die. In fact, with the kind of leadership we’ve seen in recent decades, nobody deserves to die for a politician. (The only truly selfless president for whom it might have been justifiable to die, left the scene in 1966 amidst jubilations.)

You do not need a “bugabuga” mentality to win the next election. The referee is obviously not on your side. The government (not state) security agencies are not under your command. You know very well how our judiciary works.

You’re coming from a position of powerlessness. We saw images of how unarmed civilians were riddled with bullets in Techiman South. Nothing has happened to anyone. That’s why our wise and politically incorrect elders advised that a cripple does not start a war song.

Those lifeless bodies that were picked up at the Collation Centre in Techiman and elsewhere did not bear the name Mahama. They were other people’s children and parents and relatives. The least beneficiaries of the political bootie are often the worst sufferers in the political struggle. So don’t endanger other people’s children’s lives when on election day, your own children will be securely guarded at home.

John Mahama, you don’t need violence to win the next election. You and the NDC only need to be told the bitter truth. The NDC was careless (if not stupid) in the 2016 and 2020 elections.. You could not account for your votes.

When you were going to court to challenge the 2020 results, you could not account for a chunk of your declaration forms. In effect, if you were cheated, you wouldn’t know. How did you expect to win the 2020 election petition when you went there empty-handed and expected to use evidence from the one you accused of cheating you to succeed? Our elders say a man cannot catch a witch with empty hands no matter how physically strong he is.

To have failed to successfully collate your own results in the two consecutive elections was unacceptable. Our elders say it is only a fool whose testicles are trampled upon twice. If you don’t admit your failures and act, your precious balls will be trampled upon thrice.

The party failed your followers. As you impress on the EC to effect reforms, use this period to learn how to account for your votes.

It doesn’t take rocket science to get your “pink sheets” together and collate your results from the polling stations. It takes common sense. Stop ascribing supernatural technological powers to the NPP’s collation team. With smartphones and a well-coordinated plan, you can account for every pink sheet from every polling station in the next election.

Finally, Mr. John Mahama, don’t change who you are because you want to win the next election. It might prove counter-productive to your cause.

I still have a vague idea about the concept of comparative advantage from my high school Economics lessons. That’s why as one of your fiercest critics, I remain one of your staunchest supporters when mention is made of your love for tolerance and tolerance. Don’t blow away your unique selling proposition to the discerning Ghanaian voter with these needless utterances.

Our wise elders have thought us that a man who imitates the left-handed will eventually hurt himself. So, stop imitating others.

Be the John Mahama some of us know you to be.

With love from your friend,