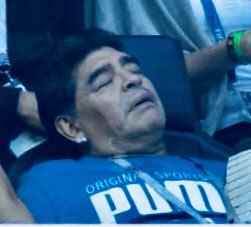 Maradona has spoken. “I want to tell everyone that I am fine”.

The Argentine superstar posted these words on Instagram to deny the many rumors about his medical condition after he attended the Argentina victory against Nigeria 2-1.

Maradona confirmed he suffered neck pain during the break at the match in St Petersburg for which he received professional treatment, but denies he was hospitalized.

The former Argentina capitan explained the sequence of events that lead some to question his well-being to the point that on whatsapp an audio gone viral spoke of Maradona’s presumed death.

“At half-time of the game against Nigeria, my neck hurt a lot ... I was checked by a doctor and he recommended me to go home before the second half, but I wanted to stay because we were risking it all. How could I leave? I send a kiss to everyone, thanks for the support!” Maradona said.

Video posted online showed Maradona being helped at half-time to take the stairs back to his stadium suite. Once inside, the 1986 World Champion was persuaded to lie down on a couch.

Even before that, during the first half of the match Diego Maradona was seen asleep in his VIP box, an image relayed to audiences all over the world. His demeanor had raised questions from the moment he entered the stadium.

He seemed sedated at one point and then was seen dancing with a Nigerian woman from the crowd a few minutes later. 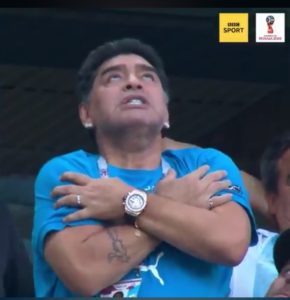 Television cameras showing his exuberant celebrations as Marcos Rojo scored the winning goal four minutes from time. He greeted it with middle-finger gestures with both hands apparently towards Nigerian fans. That gesture is under scrutiny from FIFA since Maradona is an official ambassador of football's governing body in Russia. As such, Maradona gets paid $13,000 plus all his expenses at the World Cup.

About his behavior on Tuesday, Maradona told reporters afterwards he had “only” been drinking white wine.

But some have raised questions about his antics especially after seeing a recent picture of the superstar with Guillermo Coppola, his agent at the height of Maradona’s known problems with cocaine. The apparent renewed friendship between both men coincides with the constant stream of stories of Maradona seemingly out of control while in Russia.

The BBC has quoted one of his former agents Jon Smith as saying “Maradona doesn't sleep so he takes these sleeping pills and if he interacts with other substances during the day, such as alcohol, it has an effect on him.

"I just hope he one day doesn't do something stupidly excessive and something silly happens. He's an embodiment of living life,” added the agent.

In all three Argentina matches, the 58-year-old former player has been held firmly in the grasp of some sort of security personnel as he teeters on the edge of the balcony much as he has done on the very edge of life throughout a turbulent existence. Now during this World Cup, the show has been as much as him as Argentina's performance on the pitch.

On that, for those who perhaps have become distracted by Diego, Argentina's victory against Nigeria means they reached the last 16, where they will face France on Saturday.