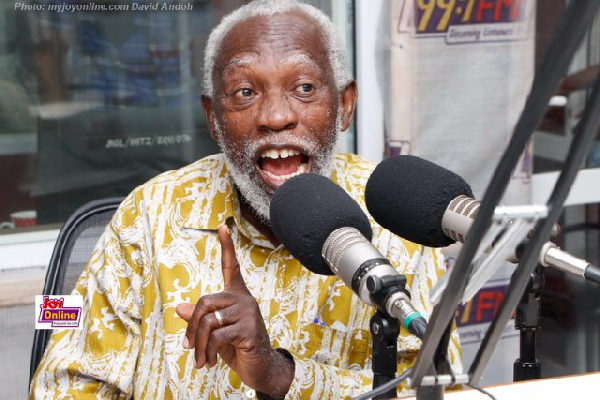 Sometimes, I'm painfully pained that we glorify some highway robbers and highly dishonest people in this country, by elevating them so high in society, without taking the pains to scrutinize their backgrounds.

Ghanaians, have elevated Stephen Adei, former Rector of GIMPA, but now a holder of 4 juicy positions in the Useless and Discredited Nana Addo Dankwa Akufo-Addo's government so high that telling Ghanaians about his deceitfulness will be an audacious task. But I'll still try.

In case you don't know, Stephen Adei is currently the Board Chairman of the Ghana Revenue Authority, Chairman of the National Development Planning Commission, Nana Addo's representative on the Judicial Council, and a member of the Advisory Board of the Ministry of Finance.

Ladies and gentlemen, it'll be interesting to know that if this were boxing, Stephen Adei will have captured 4 belts under his armpit: Heavyweight Champion of the WBC, WBA, WBO and the IBF.

But unbeknown to many good people of our dear country, Stephen Adei, has many, many skeletons in his "Kwaku Ananse" cupboard.

Dr. Stephen Adei was sitting his somewhere in Namibia, as the Resident Representative of the UNDP. But in 1999, he was invited by then Vice President JEA Mills to head GIMPA, and help in its restructuring and reorganization into a tertiary institution.

So I want readers to get this information right. Dr. Adei was not or has never been an Academic. He has never been a lecturer, senior lecturer nor an associate professor in his life.

So in the invitation letter instead of the Zimbabwean institution addressing Stephen Adei as Dr. Stephen Adei, they erroneously addressed him as Prof. Stephen Adei. Bam! Stephen Adei decided from then on to run with that title, which he had not earned.

Anybody who does not believe me should go to GIMPA and verify what I'm saying.

When Dr. Stephen Adei started using the title Professor, the dons at GIMPA were not happy at all. They did not like it, so many of them protested vehemently.

But Stephen Adei stuck to his grounds. Instead of him dropping that title he continued to use it. Adei later applied to GIMPA to approve his professorship but after careful scrutiny by a panel, he was denied because he did not qualify.

In spite of this humiliating push back by GIMPA, Stephen Adei still did not relent but continued to use the Professor title until he left GIMPA, and still uses the title today.

Now some Ghanaians have started adding an additional title to this fraudster, Stephen Adei.

Can you believe that some people especially journalists in Ghana even now address Stephen Adei, as Professor Emeritus? Haba! My fellow Ghanaians.

This guy has not earned anything to deserve the professor title he has accorded himself.

In case you are unaware, these are the steps to become a full professor.

1. You can enter the Academia with a Masters/PhD degree and start as a lecturer. After serving for a certain number of years, which is not less than 4 years you could apply to become a Senior Lecturer.

But you can only be successful in becoming a Senior Lecturer after you publish a number of articles in reputable journals, and contribute to society by giving back to the community through voluntary work. All these will be assessed before you can be promoted to become a Senior Lecturer.

Strong focus is also placed by the review committee on your ability to secure funding/grant for the University you are teaching.

In addition your contribution to society is also reviewed before being promoted to Associate Professor.

3. When an Associate Professor intends to become a full Professor, he/she needs to serve for a certain number of years, notably four to six years, get some articles to be published in reputable journals. In addition you need to help the University by securing grants for the school, and also contribute to society/community through service. You get to become a full Professor by showing that you are still delivering through teaching and publications.

When you have done all that, a panel meets to assess your work to give recommendation for you to be promoted to a full Professor.

Therefore, you can never become a full Professor if you have not gone through the mill, through hard work.

The icing in the Academia cake is Emeritus, which is given to Academics who make immeasurable contributions to the Universities.

With the above information that I've provided, Stephen Adei should come and challenge me.

Do you know that Mr. Egbert Fabille, then a budding journalist was so infuriated when Stephen Adei arrogated to himself the Professor title that he took him to court? But in a bizarre ruling the court stated that it cannot strip Stephen Adei of the Professorship, which he claimed he won on merit. On what merit?

Dr. Stephen Adei is no Professor, and definitely no Emeritus. So journalists who continue to call him Professor and Professor Emeritus should cease forthwith.

This big time liar has lied himself to acquire 4 juicy positions. No doubt he lied to Ghanaians that the GRA exceeded its revenue target in 2019, took some staff of GRA to thank God in a church in Kumasi, but two months later reversed course that GRA could not meet its target for 2019.

If Stephen Adei is man enough he should come out to deny the information I've put out for public consumption.

We need to check the backgrounds of these bootlickers before we raise them so high above the heavens.

I'm taking a rest for Stephen Adei to respond to this article.

Stephen Adei, I'm waiting pensively for you! If you're man enough come swinging.