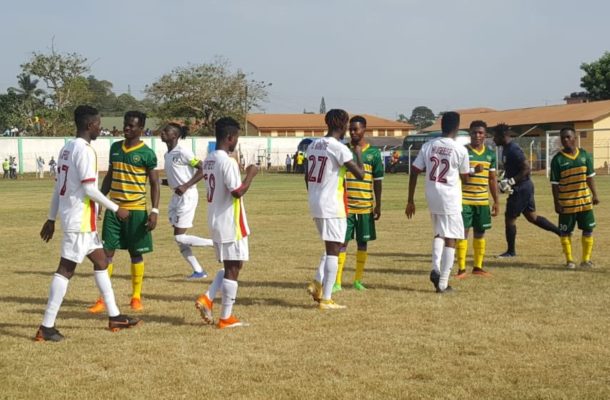 Techiman Eleven Wonder continued from where they left off the last against Kumasi Asante Kotoko with an impressive 2-o win over Ebusua Dwarfs at the Ohene Ameyaw Park on Friday afternoon.

It was the first game of match week two and the home side bossed the early exchanges of the game but could not convert the chances that came their way.

Eleven Wonders were awarded a penalty after the referee had adjudged the ball to have touched the hands of a defender from Ebusua Dwarfs.

Former Hearts midfielder Tetteh Nortey stepped up and converted the spot kick for the home side in the 31st minute of the game to make it one nil.

Ebusua Dwarfs tried to pull parity but lacked the cutting edge up front to trouble the Eleven Wonders rearguard while they missed the half chances that fell their way.

On loan Dreams FC striker at Techiman Eleven Wonders, Prince Okraku who slayed Kotoko last week enhanced his reputation further as he came from the bench to hand his side the second goal in injury time.

Man of the match for the second game running went to talismanic attacker  Salifu Ibrahim after picking same accolade against Kotoko last week.

Techiman Eleven Wonders have now picked up four points out of a possible six whiles Dwarfs are still searching for their first victory having drawn their opening game against Elmina Sharks.