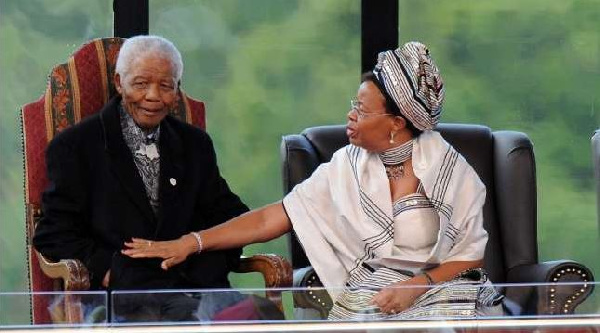 “It’s not two leaders who fell in love with me, but two real people. I feel privileged that I have shared my life with two such exceptional men – Graça Machel

There are many things Africa has given the world which is why it’s such a wonderful place to live. Having two presidents in a country at a time is extraordinary, but the motherland has also had the only woman to have become the First Lady of two different countries – Mozambique and South Africa.

Meet Graça Simbine Machel, the only person in history of the universe to have been the first spouse to two different democratically elected African leaders.

Graça Simbine Machel was born on 17 October 1945, in Gaza, Mozambique, and she was the last child in a family of six. Her father died three weeks before her birth and left an instruction that she must be educated through high school. A will that was carried out by her older siblings.

After completing high school, the Methodist church granted her a scholarship to study at Lisbon University, Portugal. And she chose to major in languages.

Due to Surveillance from the Portuguese secret police, she was forced to abandon her education and fled to Switzerland.

In 1973, she returned to Tanzania and joined the FRELIMO where she met her first husband,Samora Machel – the first president of Mozambique.

On June 25, 1975, Mozambique gained independence and Samora Machel was made the first president of the new country.

At sworn in as a president of the new nation, Samora Machel was a widower as his wife, Josina, had died of leukaemia in 1971.

In September of 1975, Graça married Samora Machel and became the First Lady of the country.

She combined this position with her cabinet portfolio as Education minister till 1986.

Samora Machel died in a plane crash on October 19, 1986, and this made her to resign her post as the country’s Minister of Education.

Graça’s marriage to Mandela was dramatic as it was announced at the 80th birthday of the late icon. This was in the presence of over 2,000 international guests in 1998.

Having tied the nuptial knots with Mandela, Graça assumed the position of the First Lady of South Africa at age 52.

Graça said about her marriage to Mandela: “We were grown up; we were settled; we knew the value of a companion, of a partner.”