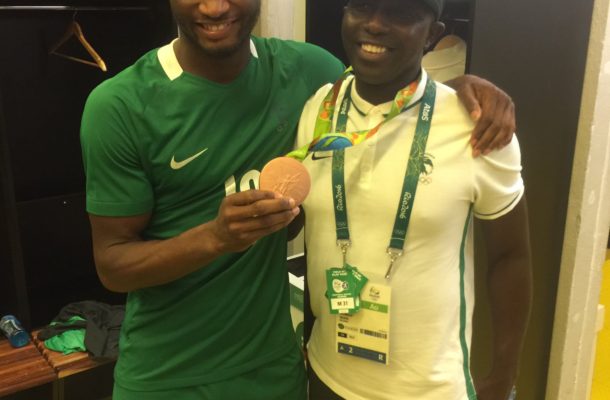 Super Eagles skipper John Mikel Obi has revealed how the U-23 Eagles were left to starve while preparing in Atlanta ahead of the Rio 2016 Olympic Games.

Despite not having the best of preparations, the U-23 Eagles won bronze in the football event in Rio.

Reminiscing on the team's ordeals prior to the games, Mikel told chelseafc.com it was terrible experience while commenting on his role as captain of the U-23 Eagles and also Team Nigeria.

"It wasn’t a great experience in the build-up in Atlanta. There was no food for the guys, no bus to go to training, no pitch to train on. Coming into the team I tried to help as much as I can," Mikel said in an interview with Chelsea's official website.

"The boys had suffered for two years, working very hard trying to play in Rio. I wanted to help as much as I could and they all say they owe me. It’s a great achievement that we managed to go there and win a medal."

The Nigeria captain however admitted he had a great time in Brazil.

He added: "Yes, it was amazing. Leading the team not just in football but athletics, basketball, everything, was amazing for me. What an honour to be able to do that, and to represent my country is something I’m always proud of.

"The boys were absolutely amazing and I hope to see them all playing at the top level soon."

Mikel who is yet to feature for Chelsea since returning from Rio, recounts his experience in his first ever Olympics.

He also ranked the bronze medal won by the team as one of the high points in his football career.

"I hadn’t played in an Olympics before, I missed out in 2008 in Beijing and in 2012 we didn’t qualify for London, so I spoke to the club and got their permission to go. It was an amazing experience to play with the Under-23s and lead the team, being the captain of the nation leading it to Rio. I’m very, very proud.

"As a footballer you probably only get one opportunity to play in the Olympics, it was a great experience and the Brazilian fans were amazing too. They supported us all the way and wanted us to do well, to make the final. It was one of the best tournaments I’ve had.

"The reception at home was great. The Nigerian people were very happy, it was the only medal we won and they were very proud."

On his relationship with Samson Siasia and the impact the former Eagles coach had on the team, Mikel added:

"We've known each other for a long time.

"We know how to communicate with each other and it made for a good atmosphere with the rest of the team on the training pitch. We tried to calm the players, make them see the bigger picture and not let external things influence us."

And on the U-23 Eagles arriving just hours before their first game against Japan and his goal in the quarter-finals against Denmark, Mikel said: "It was a crazy one! We just came off the plane two or three hours before the game, went to the hotel, put our bags down, ate and headed straight to the stadium. Not the typical match preparation.

"So it was a crazy game, lots of goals, and one we were very happy to win though. To go from there and win the second game helped us settle into the tournament.

"I always do (scoring goals) when I play for the national team! I tend to push a bit further forward and express myself a little bit more, so there is more responsibility to create chances, and if I can get one or two goals here and there it’s great." source:completesportsnigeria.com