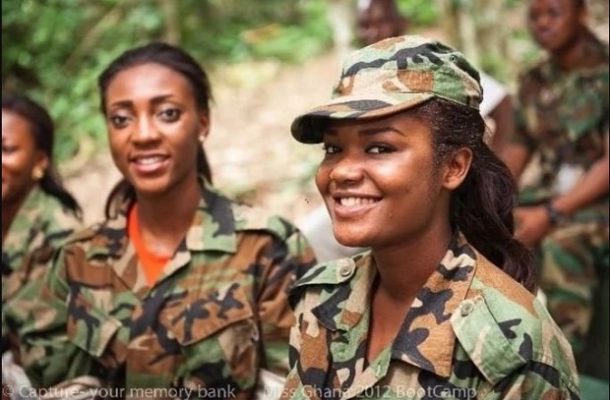 Women in the military have marked the 60th anniversary of their relentless and selfless service to Ghana, with the former Chief of Army Staff, Major General Samuel Odotei (Rtd.) putting the icing on the cake, with a piece of advice that may mean a lot to some Ghanaian homes.

The advice, though short, was a warning to the military women not to bully their husbands but should rather be loving wives and caring mothers at home.

According to Major General Odotei, the military women should not extend their work ethics, that is, ‘obey before complain’ to their homes, since the home is what makes a person.

He used himself as an example, saying he leaves his ‘bag and baggage’ as an officer in the office and returns home each time as a lovely husband and a caring father, by not conflicting the two responsibilities.

He believes this practice will go a long way to build and strengthen bonds between families to become healthy and peaceful. He, therefore, advised women in the military not to ‘bully their husbands at home’.

Nevertheless, he highly commended the roles being played by women in the military, which has in no doubt being outstanding over the past 60 years.

The former Chief of Army Staff was addressing the military women’s 60th anniversary as the special Guest of Honour on Sunday at the Burma Camp in Accra, which was also attended by a team of reporters from The Chronicle.

Inspired by the contributions made by the women, he said nobody ever imagined that the Ghana Armed Forces would have a large number of females today. To him, this shows how special and powerful women are.

Major General Odotei said initially women were being recruited into the military to perform supporting services, which is currently not the case, since they are now holding important positions as officers contributing their quota to the defence of the country.

Madam Joyce Aryee, former Chief Executive of the Ghana Chamber of Mines, whilst delivering a sermon, urged the women to be proud for joining the armed forces, since it is a work designed by God.

According to her, God in his own wisdom first instituted the army, hence the armed forces are a direct work of God.

She further argued that an army on earth is not the idea of man, but the idea of God to use it to protect the people, to fight against those who trouble them and defend their respective countries.

With this, she encouraged the military women to always carry the banner of God and show that they are grateful for how far He has brought them.

Six decades ago, 12 women were first enlisted, one of them, WO1 Vincentia Yaotey was awarded by the organisers.