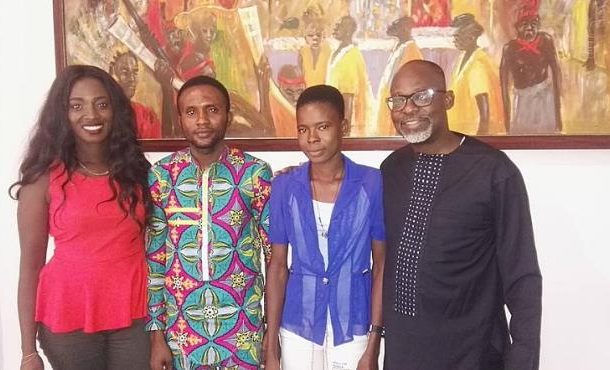 The two Ghanaian Champions, overall 2nd place winners at the 2016 Millennium Marathon Malik Yakubu and Lariba Zakat have paid an official visit to the office of the organisers at Nima in Accra.

They were received warmly by Ambassador Ashim Morton and Carthy Morton alongside other staff of the Millennium Marathon Sports Company.

Amb. Morton congratulated them for their heroic feats and promised them of an international marathon in Ethiopia, where they will be flown by Ethiopia Airlines, one of the principal sponsors of the Millennium Marathon.

He promised to offer them special training programmes to help them improve upon their times and encourage them to aspire for greater heights.

Malik Yakubu, the first Ghanaian male to finish said he was impressed with the fantastic prize of a brand new Peugeot car and hinted that the motivation for many runners was the prize and hoped other sports organisers will put up prizes that can encourage more patronage.

He thanked the sponsors of the Millennium Marathon and prayed that other companies will join in the years to come.

Carthy Morton, Director of the MMSL noted that it was not easy organizing the second edition due to many challenges, however it was another successful event.

She said despite the fact that the runners were not as much as expected like in last’s year’s race with over 20,000 runners, this year had over 7,000 runners and it was incident free.

She commended the security agents and motorists who compiled with the directions and also pedestrians who obeyed the road signals and instructions.

Frank Vardon, Public Relations Officer of the MMSL commended the press who covered the event. He prayed for better working relations in subsequent races.