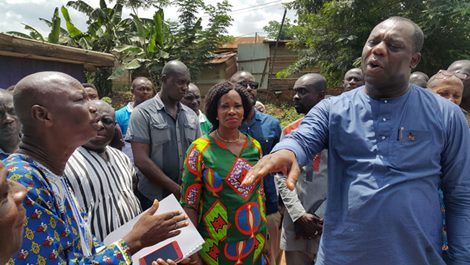 The board of Prempeh College in Kumasi has been dissolved with immediate effect.

A new interim management committee (IMC) will be formed in place of the board by next week.

The fate of the headmaster of Prempeh College, S.K. Fordjour, is presently hanging on a thread.

The headmaster’s fate is expected to be decided by the Ashanti Regional Education office by today.

The Minister of Education, Dr. Matthew Opoku Prempeh, revealed this on Friday.

He added that an illegal building project right on the school’s compound influenced his action.

A Kumasi-based businessman has started the construction of shops on the premises of Prempeh College.

The school’s board had been alleged to have leased out a parcel of land belonging to the school to a private construction company, God Mercy Construction Limited, to construct shops on the school’s premises.

Available records show that the ‘illegal’ project was sanctioned by the school’s board.

The headmaster reportedly played key roles for the ‘illegal’ project to take place on the school’s compound.

A building permit, according to investigations, was not secured before the project, which is currently at the foundation stage.

The contractor was planning to pull down the school’s wall after completion of the project for his selfish interest.

The Ashanti Regional Education Director, Mary Owusu Achiaw, and the developer were present when Dr. Opoku Prempeh issued the order.

The minister criticized the board for allowing the project to take place, indicating that it would also prevent the school from undertaking any meaningful expansion project in future.

Dr. Opoku Prempeh, therefore, ordered the private developer to stop work immediately, adding that he would make sure that the project is demolished and the land levelled for the school to use in future for expansion works.