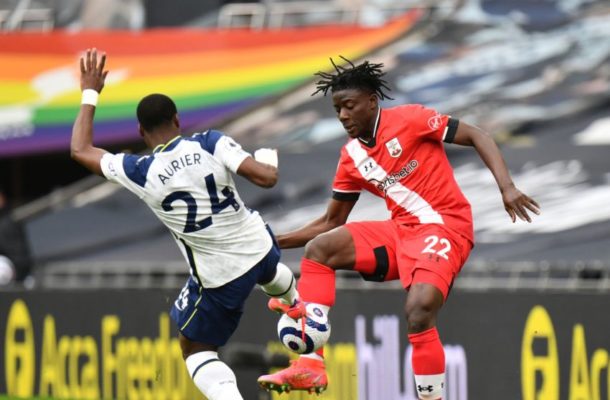 Ghanaian defender Mohammed Salisu was rock solid at the back for Southampton as they lost 2-1 to Tottenham Hotspur in their English Premier League game on Wednesday evening.

It was his 5th start for the saints since making the switch from Spain in the summer.

Former Spurs midfielder Mason, the Premier League's youngest head coach at the age of 29, succeeded Jose Mourinho after the Portuguese was sacked on Monday.

He made a winning start to his tenure after Gareth Bale curled in a superb equaliser and then a late VAR intervention saw Son convert after a Moussa Djenepo foul on Harry Winks was shown to be just inside the penalty area.

Until Bale's composed finish on the hour mark the hosts had been second best to a slick Southampton side who went in front when Danny Ings glanced in James Ward-Prowse's corner.

With Harry Kane missing and still a doubt for Sunday's Carabao Cup final, Spurs were flat for long periods and appeared to have been affected by their tumultuous few days, with Mourinho departing fewer than 24 hours after the club announced they were to join a new European Super League.