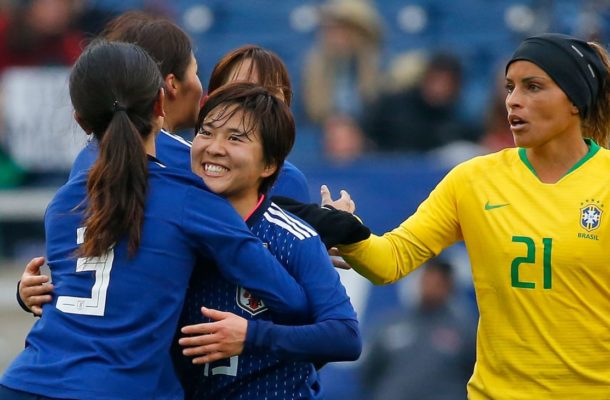 Nashville: Japan continued their promising form at the SheBelieves Cup, stretching their international unbeaten run to eight with a 3-1 win over Brazil in their second match of the tournament on Saturday.


Yuka Momiki, who scored one goal and set up the remaining two, was the star of the show for the Asian champions, while newcomer Rikako Koboaysahi and Yui Hasegawa also got their names on the scoresheet to cap an impressive display

Japan's win takes them to four points from two matches, putting them in a position to win the tournament should they win in Tuesday's final match against England, who drew 2-2 with the United States in Saturday's later match.

Fresh her stoppage time equaliser against the United States on Wednesday, Momiki's influence began when her heavily deflected effort in the 23rd minute forced Brazil's Aline into an acrobatic save, although Japan spent much of the first half on the back foot.

Beatriz, who was denied by goalkeeper Erina Yamane, and veteran Formiga - who skied a great chance in the 43rd minute - had the best of Brazil's chances, but they were punished for their inability to capitalise just before half time when Momiki opened the scoring.

The in-form NTV Beleza forward's strike - on 44 minutes - was a thing of beauty, as she calmly lobbed Aline after being intelligently supplied by Emi Najikma, who carved out the opening with a clever run and pass.

The Japanese lead lasted until 12 minutes into the second half, when the Nadeshiko spurned several opportunities to clear their lines during a chaotic defensive sequence, with the ball eventually falling to Debinha, who picked out the bottom corner from 15 yards to level the tie.

Brazil were well on top during the early stages of the second half, and Japan survived a similar scramble just after the hour mark, before Momiki tried another lob against the run of play, this time pulling her effort wide from a position or great promise.

But Japan took control late on, and Momiki turned provider for club teammate Kobayashi, who netted in just her second international match, scoring a lovely cushioned header in the 81st minute to finish off a sweeping counter attack in which fellow youngster Jun Endo played a key role.

It was Momiki to the fore again four minutes later, when her clever pass teed up substitute Yui Hasegawa, who twisted and turned before slamming home Japan's third to seal all three points in another positive step on the road to the 2019 FIFA Women's World Cup France.