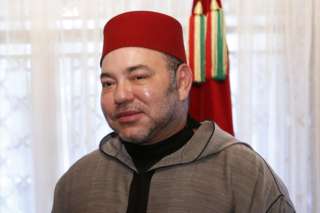 The King of Morocco, Mohammed VI, has called on Moroccans living abroad, many of them in Europe, to defend a tolerant form of Islam and reject extremism.

It was his first address to the five million Moroccans in the diaspora since the recent attacks in Europe by Islamist militants.

European citizens of Moroccan origin were implicated in some attacks.

Condemning the murder of innocent people, the king singled out the killing of a priest in France.

Two followers of so-called Islamic State (IS) slit the throat of Father Jacques Hamel, 84, during Mass at his church in a suburb of Rouen.

"Killing a priest is forbidden by religion," King Mohammed said in his speech on Saturday evening.

"Murdering him inside a church is unforgivable madness, for he is a human being and a religious man - even if he is not a Muslim."

Two of the IS militants killed in the aftermath of the Paris attacks in November were Belgians of Moroccan origin, Abdelhamid Abaaoud, the suspected ringleader, and Chakib Akrouh, a suicide bomber.

The three IS militants who bombed Brussels in March, Khalid and Ibrahim el-Bakraoui and Najim Laachraoui, were also of Moroccan origin.

The king said that those who engaged in terrorism, in the name of Islam, were "not Muslims".

"Their only link to Islam is the pretexts they use to justify their crimes and their folly," he said. "They have strayed from the right path, and their fate is to dwell forever in hell."

Extremists, the Moroccan monarch said, were exploiting young Muslims to spread misleading messages about Islam and distort its peaceful values.

"They think - out of ignorance - that they are engaging in jihad," he said.

"Since when has jihad been synonymous with killing innocent people? The Almighty says: 'Do not transgress limits, for Allah loves not transgressors.'

"Is it conceivable that God... could order someone to blow himself up or kill innocent people? Islam, as a matter of fact, does not permit any kind of suicide - whatever the reasons or circumstances."

Under Mohammed VI, the Moroccan monarchy has taken on a more modern, reformist image.