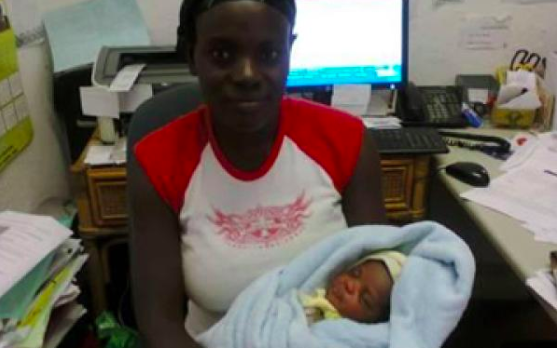 A 25-year-old mother is currently in the grips of the Sefwi Wiawso police for allegedly selling her 3-month-old baby to sponsor her boyfriend's trip to France.

According to the report, the lady, Sarah Kwabla and Akwasi Botwe (both unemployed) have been in a relationship for some time now.

It says a friend of Kwame Botwe who resides in France, Yaw Kinto promised to invite Botwe to France if he could raise Ghc10,000 but Botwe has been able to raise Ghc2,000 due to his unemployment situation.
According to Akwasi Botwe, all efforts in raising the remaining Ghc8,000 has proven futile. He said in the early hours of Tuesday  September 24, 2019, his supposed wife Sarah Kwabla credited his bank account with an amount of Ghc8,000.

He said when he quizzed Sara on how she came by such an amount, she told him she sold their only child who was just 3 months old to a certain “Mallam” who lives in the same neighbourhood with them.

Akwasi Botwe immediately reported the case to the Sefwi Wiawso police which led to the arrest of Sarah Kwabla.

She is currently in police custody while investigations are ongoing.