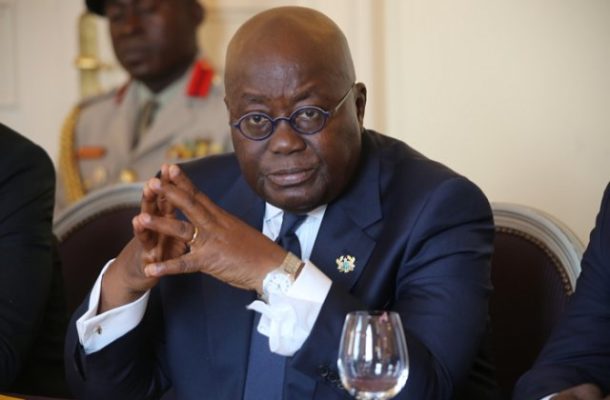 As part of your tour to of the three Northern Regions, you announced that from the 2018/2019 Academic Year, Senior High Schools will run on what you and your government call 'the double track system'. For the benefit of other readers, let me rehash below in bullets how the proposed system will work;

• This system splits the entire student body and staff into two different tracks,

• So while one track is in school, the other is on vacation,

• Every semester will be 80 days for the two tracks - for one semester, every track will be in school for the 40 [only 40 Days] then go for a break for 40 days.

Mr President, this will totally break down our Senior High Schools in a way that I'm unable to find words to describe in my opinion. Suffice it to say that, my fears have not been allayed by your assurance that it will be a success since it's been tried elsewhere before. You fell short of mentioning where else this system operate successfully and additional statistics. But of course I cannot begrudge you, you didn't have all the time to make this disclosures.

Your excellency, 40 days in a semester for SHS? It take at least a week for SHSs in the country to have a sizeable number of students reported to begin academic work. And how many days or weeks for exams? How about weekends? Mr President 40 days can never be adequate to cater for our overly packed SHS syllabus. And what will the other students be doing in the House for the 40 days before returning to school?

Sir, even for the three term per academic year that we run now, most schools are never able to complete their syllabus, and the end results is what we seen in the almost perennial abysmal performance at the WASSCE level. We'd have officially returned to the shift system we abolished in the basic school structure. It is certainly improper to run a shift system in today's world methinks.

Mr President, according to statistics from the a Ministry of Education document, there are over 470,000 students who enrolled for the first year of the Free SHS program. This implies that for a complete 3 year SHS at any point in time, there will be at least a MILLION Senior High School students by the time the FREE SHS cover all students from 1st to 3rd year (it's covering only form 1s heading to form 2 now).

Mr President for just the cohort of students, your government budgeted 1.2 Billion Ghana Cedis for the free SHS, that's huge and it must be noted that this for only first years (it certainly included other expenses of the program), again, by simple calculation, it will mean that by the time the program cover the entire Senior High School (forms 1-3), we could be spending triple the amount budgeted quoted above. And that's in the region of more than 3 Billion Ghana Cedis.

Mr President, in this country, the reality is we have always struggled to meet revenue targets, with an economy of more than 40 Billion Dollars (in GDP terms), we struggle to even raise 10 Billion Dollars to do EVERYTHING we have to do as a country. Of this amount, it's trite knowledge that we spend more than 60 percent or so taking care of the salary/emolument/compensation of public sector workers.

Some goes into health, security, agriculture and a plethora of government critical spending areas - we haven't talked about capital investment (infrastructure) yet.

Your excellency, all the above was to rehash the precarious nature of our finances as a country, of course, as the man in charge of the purse, I know you know more than I may ever in how sad a state, our finances are. And yourself, your deputy and the Minister of Finance have always hammered on this. So this isn't really a secret.

What am driving at is simple - Mr President we cannot afford Free SHS on its current system. I believe it was for this reason that framers of our esteemed 1992 constitution provided that FREE SHS be made free but in a progressive manner. Chapter 5 of the 1992 Constitution on Fundamental Human Rights and Freedoms, Clause 25 (1) states that all persons shall have the right to equal educational opportunities and facilities and with a view to achieving the full realisation of that right.

Clause 1 (a) states that basic education shall be free, compulsory and available to all, while clause (b) also states that secondary education in its different forms, including technical and vocational education, shall be made generally available and accessible to all by every appropriate means, and in particular, by the progressive introduction of free education.

I have no doubt, your excellency, that you have good intentions particularly when it comes to matters relating to FREE SHS. Apart from the fact that it has been your flagship and most consistent campaign promise since you made the move from 2008 till you became president in 2016. Aside that, the swift nature with which you launched the program in your first year in government alone, should tell the ardent of your critics that you're committed to the program and you don't see it only as a campaign promise.

But sir, commitment alone is not enough. The most important part of all this is the finances to prosecute this very ambitious and laudable program. And as I have recounted above, it's clear, to me at least, that we do not have the finances for that.

At the outset of this program I was fully for it, until photos of SHS students sitting on the floor, sleeping outside flooded the traditional and social media. It is an eyesore. The congestion in our Secondary schools have reached a near-crisis level. Prof. Ransford Gyampo of the UG Political Science Department raised concerns that I disagreed with in one of our Introduction to Public Administration classes but which I now fully agree and associate with. Prof., you may come for your stone.

When I was in Benkum Senior High, we were more than 90 in class, I'm telling you this because I was the class secretary for my class. At a certain period, my desk, yes mine, was just in front of the whiteboard marker, you know this. It was worse in other places. As a result, we were hardly given regular exercises if any, the few we were given were not marked, I don't blame the teachers, they were not many and had to deal with large numbers. The situation at the dormitories was worse. The results of my year group is still in the archive - you can check, and it was so for almost every school. Now that enrolment has increased by an expected yearly average of 90,000 students, I know the problem has become immense.

Your predecessor began what they called PROGRESSIVE FREE SHS by paying full fees for only day students. I believe, that for now that may be our best bet. I understand the politics of this as well. I understand that your political opponents may make a meal out of it if you beat a retreat, even if they do, that's expected, I'd expect that your party would do same in the shoes of the opposition if it should happen, but sir that's expected, it’s part of the political discourse the world over. Hence Mr President let's not value political expediency over implementing a program which will not cause undue problems.

Mr President, I will suggest that you revert to that policy. Either pay the fees for only Day students for now, OR let government absorb all other materials on the fee schedule expect the boarding fees for all students. That is the element which balloons the fees. Sir, you'd still have made an impact on relieving the ordinary Ghanaian of the huge fees some endure. That way, we can all brainstorm as a country on how to absorb other materials on the bill. There is a sizable amount of parents who can afford the fees for their wards at that level - let them pay that for now, government will take care of all when it has the means.

Finally Mr President, in a country where almost every word is interpreted and given political colouring and leaning, let me declare that I have nothing against the FREE SHS policy, I would not be patriotic if I have, because I know the burden of some parents. During my days at Benkum Senior High School, I was sacked from class and the exam hall a couple of times because I owed fees, so yes I know how it feel and I am in support of the program, but sir, let's but what we can chew, before we lose all our teeth.

All the best, Sir.

Your citizen, not spectator,