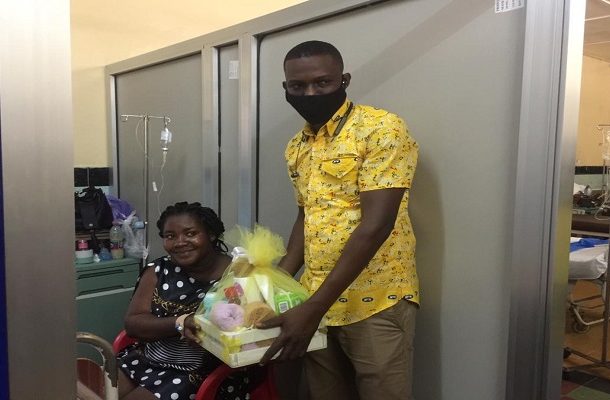 Communications giant, MTN Ghana, has donated hampers worth thousands of Ghana cedis to new babies born on Christmas Day at Koforidua in the Eastern Region.

In all 20 nursing mothers who delivered on December 25 benefited from the company’s social responsibilities in line with their end of year annual support to newborns on Christmas Day.

He said it is also done simultaneously across leading hospitals in the 16 regions of the country to help put smiles on the faces of mothers who delivered on December 25. He stressed that the day is special and memorable so the company realized the need to support these wonderful mothers who go through a lot during labour.

On her part, Mrs Kathlyn Nyassingbe, the Midwifery Officer and acting Deputy Matron at the O&G Department of the Regional Hospital thanked the MTN team for their kind gesture towards new babies.

She disclosed that 15 babies, 7 males and 8 females were born on December 25.

“We had 15 mothers who gave birth yesterday that’s 25 but two of them have been discharged because they had no problem and we had to discharge them to make some space available after we saw that they were responding positively after 6 hours of delivery,” she said.

She pleaded with other coperate bodies to help renovate the Maternity Ward and and expand the beds to ease congestions at the facility.