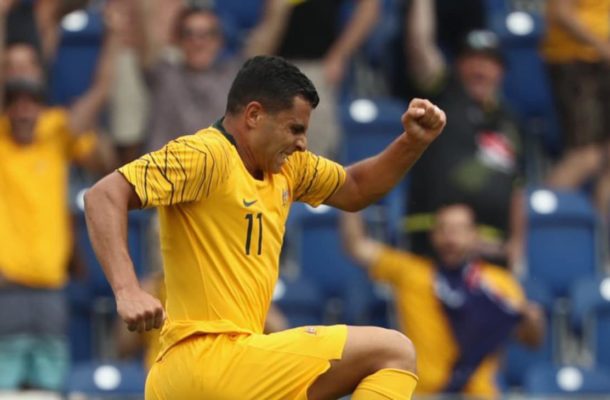 Abu Dhabi: Australia forward Andrew Nabbout is relishing the opportunity to play free-flowing, attacking football under head coach Graham Arnold as the squad continue their preparations ahead of the AFC Asian Cup UAE 2019.


Nabbout, currently playing in Japan for Urawa Red Diamonds, made a name for himself in the A-League with Melbourne Victory before really turning things on last season with the Newcastle Jets.

He believes Arnold has instilled a brand of football that utilises the pacy, attacking qualities of his teammates which includes the likes of himself, Robbie Kruse, Mat Leckie and Martin Boyle.

“It’s the type of football that I love playing,” said Nabbout. “We love putting teams on the back foot and pressing them high and getting in behind them, and always keeping them guessing.

“Especially with a pacy three up front, we’re always switching and we’ve got that freedom up front to make different runs and switch around at times.

“We’re all going to get ourselves in the box — it doesn’t matter who scores, we’re going to be causing teams real headaches.”

The Socceroos will need to call upon those positive traits if they are to continue their dominance in the tournament.

In terms of populations, the AFC Asian Cup is the largest continental tournament in the world, with participating countries making up more than three billion people — over a third of the world’s population.

Having played his first season in Japan’s J1 League, the tournament’s gravity is not lost on Nabbout.

“It’s a massive tournament for every Asian team, but especially being in Japan, it’s amplified,” said Nabbout. “They take it very seriously and they treat it as another World Cup.

“I played against a lot of the boys that are in the national team and it’s going to be a good test for us.”

After injuring his shoulder at the @FIFAWorldCup, @andrewnabbout set himself a goal to be back in the @Socceroos setup for the @afcasiancup. #TogetherAsOne #GoSocceroos pic.twitter.com/pufNIyaxhh— Caltex Socceroos (@Socceroos) December 27, 2018

When Nabbout fell to the turf and clutched at his shoulder during the 2018 FIFA World Cup Russia against Denmark, many fans may have thought the 26-year-old would be dealt a long stint on the sidelines.

And while his lay-off was by no means short, Nabbout’s hard work and double shifts halved his recovery time and earned him a spot on the plane to the United Arab Emirates.

“But I had something to look forward to, I had a goal.

“I never once thought in my mind that I wouldn’t be ready for this tournament, so I put that in my head and I did my rehab three times a day until I was ready to come back onto the pitch.

“Then when I was on the pitch I was training twice a day to get fit again.

“It was a lot of hard work but it challenged me mentally which was good, I haven’t had an injury like that and this has been my longest lay-off so it was good to get that mental test and now I’m back and I’m ready.“

Now Nabbout is at full fitness, mentally and physically ready as the squad prepare for Sunday's friendly against Oman — their final hit-out before their Group B opener against Jordan on January 6. They will face Palestine five days later and then Syria on January 15.