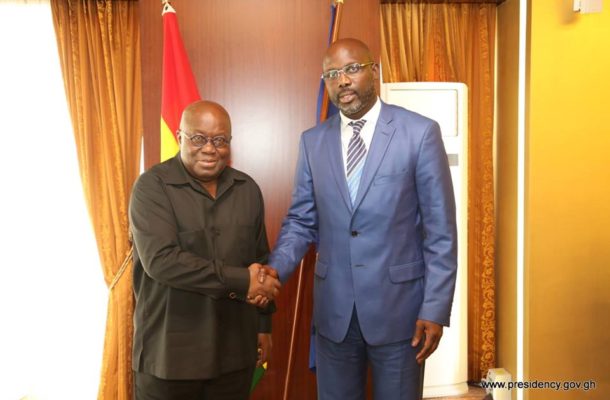 President Akuffo Addo has has sent his congratulations to George Weah following his election as Liberian President.

Nana Addo has also showered praises on the defeated Vice President Joseph Boakai "for the maturity in his campaign.

The President, in a Facebook post, expressed hopes that the former World Best Footballer's election "will lead to the improvement of the living standards of Liberians".

"Warm congratulations to George Oppong Weah on his decisive victory in Liberia’s peaceful presidential run-off, thus becoming the next President of the Republic Liberia," the post read.

"Vice President Boakai is also to be commended for the maturity of his campaign. This election has strengthened the frontiers of democracy in Liberia, and it is our hope that it will lead to the improvement of the living standards of Liberians. Best wishes for the success of President-elect George Weah, and Vice President-elect, Jewel Taylor."

A snapshot of a video footage went vitral  on social media which captured President Nana Addo Dankwa Akufo-Addo congratulating Unity Party (UP) Standard Bearer Vice President Joseph Boakai, but the ministry of information refuted it and "urge Ghanaians to disregard this false news".

A ghanaguardian source at the Flag Staff house had earlier revealed  the president had indicated he "will wait until official declaration is made".

Nana Addo's congratulatory message comes after officials reveal that with most ballots from Tuesday's run-off vote counted, Mr Weah is well ahead of opponent Joseph Boakai.

The National Elections Commission (NEC) said on Thursday that with 98.1% of the run-off vote counted, Mr Weah had won 61.5% of the vote while Mr Boakai was far behind with 38.5%.

Mr Weah played for a string of football clubs, including AC Milan, Chelsea and Paris St-Germain, and is the only African footballer to have won both Fifa World Player of the Year and the Ballon D'Or.

He entered politics after his retirement from the game in 2002 and is currently a senator in Liberia's parliament.

The former World Footballer of the Year become the first famous player in the world to clinch the high office of a country after retiring from the game.

The ballot was delayed for seven weeks due to legal challenges lodged by Boakai's Unity Party against the electoral commission over the conduct of the first round of voting, but many of the complaints appeared to have been addressed in the second round.

Liberia, founded by freed US slaves in the 19th Century, has not had a smooth transfer of power from one elected president to another since 1944.