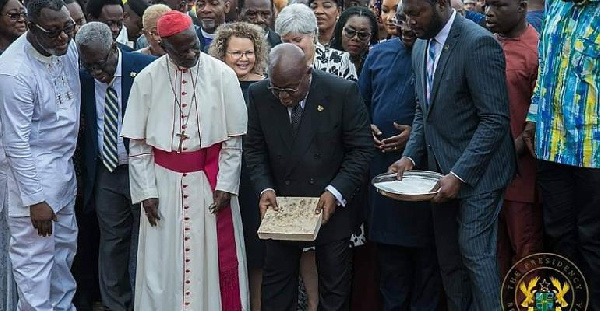 As a former Knight of the Alter (Mass Server and a believer in God) who nearly joined the major seminary to become a diocesan Priest, one thing I have learnt about God is that he Hates hypocrites with passion. I strongly believe he openly hates them because they are the most dangerous people God has ever created. No wonder in the book of Genesis God said He has regretted creating human beings; a typical reason and example is Nana Akufo-Addo.

I know the behavior of NPP members and our President has made God to regret more than before.

My uncle Kofi Awoonor should have been alive to see the prophecy of his cathedral come to pass, May he Rest Well where ever he is.

Last month, the Ministry of Tourism and the Year Of Return Committee approved the LGBT Africa conference to be held in Ghana.

They initially proposed to hold this conference in countries that all vehemently opposed this evil conference which sought to send the human race into extinction. The countries that rejected to host the satanic LGBT conference are Uganda, South Africa, and Cote D’ ivoire but the moment they came to Ghana on their first request, the Ministry of Tourism with support from the Year of Return Committee gave them the approval. A decision that was taken in cabinet which we are told the President said was a tough decision that could cause him his Presidency.

Today same President was seen with men of God at a ceremony to begin the construction of Cathedral for God. Same President said after the cathedral he was going to build a National Shrine in either Volta Region or Ashanti Region, an unpopular decision which even the traditionalists have kicked against.

Today as a citizen, I would have wished the pastors who dedicated the land to God to pave way for the stones to be imported into Ghana for the construction of the cathedral to openly call the President to order on the impending LGBT Conference in Ghana.

They should have reminded the President that the cathedral of God cannot be built on lies, for the President to apologize for saying Government has no hand in building the cathedral while a budget was raised and approved by Parliament which Ken Ofori-Atta is touting as their achievement.

They should have called the President to order on the rots that has sunk the country into the mud and has made Ghana the second most corrupt country in Africa.

It is my humble prayer that the cathedral will bring solution to all our problems as a country. Corruption will come to an end after we build the Cathedral, schools will be removed from under trees, we will know who sent that list to Australia since it’s not Pius Hadzide, let’s pray the cathedral will cause the President not to lie again and immediately present competent men, etc

It is my prayer that the cathedral will give us all an open cheque to heaven.

It is my prayer that the cathedral with its foundation stones from Israel will heal and clean our land of the evil that has befallen our land which involves this regime.

It is also my prayer that the cathedral will not shut the lips of our men and women of God as we have seen over the past four years.

In conclusion one can only say our President is just pretending to love God with his acceptance of the LGBT confidence to be held in Ghana and the evil of corruption he has happily cultivated himself and is still cultivating by taking 40 million dollars of our tax to build hotel for himself.

God only is Holy, Supreme and the decider of our destiny.

I am Still A Citizen, Not A Spectator.