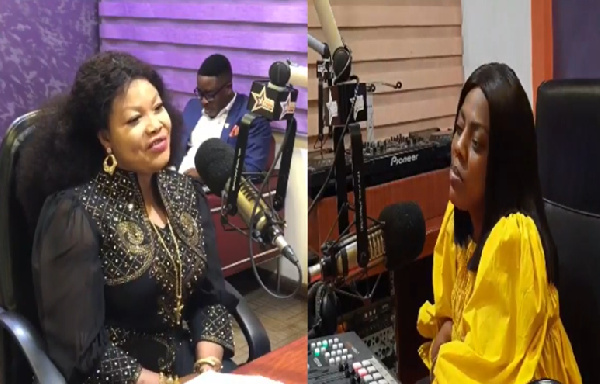 Taking her turn on Starr FM’s Starr Chart is Nana Agradaa, the priestess whose metamorphosis from the shrine to the church courted controversy in the country.

Famed for her money ritual ‘sika gari’, Nana Agradaa on April 27, 2021, proclaimed she had denied herself and taken up her cross to follow Jesus Christ. This decision, she said, was arrived at after Jesus Christ rescued her.

Like Saul encountered God on his way to Damascus and had his name changed to Paul, Nana Agradaa preferred to be referred to as Evangelist Patricia Oduro Kwarteng.

Prior to this, the priestess who gained notoriety for allegedly defrauding people under the pretext of doubling their monies was arrested by state security operatives for operating TV stations without licenses.

On June 16, 2021, she was handed a fine of GH¢46,000 for operating television channels without certification and displaying what the court deems to be ‘charlatanic material.’

She was convicted by an Accra Circuit Court presided over by Emmanuel Essandoh. It was reported that Nana Agradaa pleaded guilty and was convicted on her own plea.

Agradaa, according to court documents, was fined GH¢36,000 for operating TV without appropriate documents from the authorities. Failure to pay the said amount will see her spend three years in prison with hard labour.

She was also fined GH¢10,000 for the display of charlatanic materials on live television. Default in payment will see her spend another year in prison.

The interview seeks to explore her life and find out if her move to switch from the 'dark' to 'light' was to evade the law.