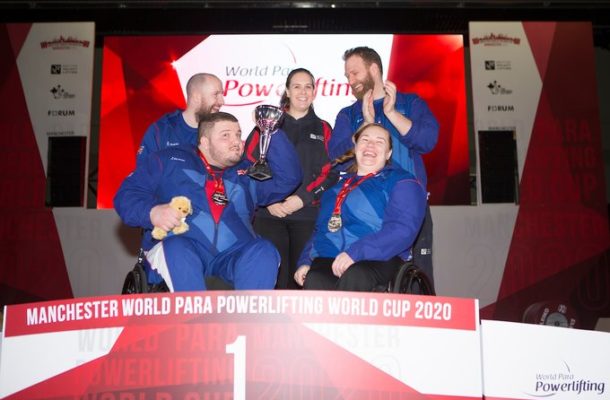 The final day of the Para Powerlifting World Cup saw competitors break national records, while the home crowd had success to celebrate as Britain topped the overall medal table.


There were four disciplines on the last day of the event in Manchester in England, which included home success in the women's up to 86-kilograms for Briton Louise Sugden, who lifted a national record of 125kg.

Only two competitors were involved in this category so Sugden was the only person to receive a medal.

In the women's over-86 kg category there was another national record as Perla Barcenas of Mexico lifted 142kg to triumph.

The silver medal went to Melaica Tuinfort of The Netherlands while bronze went to Polina Katsman of Israel, with both competitors lifting 118kg.

In the men's up to 107kg Anton Kriukov of Ukraine attempted a world record lift of 244kg at his third attempt.

He could complete this lift but did manage 240kg to ensure he comfortably took gold.

Silver went to Akaki Jintcharadze of Georgia who lifted 190kg while the bronze went to Michal Salwa of Poland who lifted 186kg.

The final category of the competition was the men's over-107kg with Konstantinos Dimou of Greece victorious after lifting 222kg.