NDC 2020: I have listened to your calls and reflected - Mahama bows to pressure 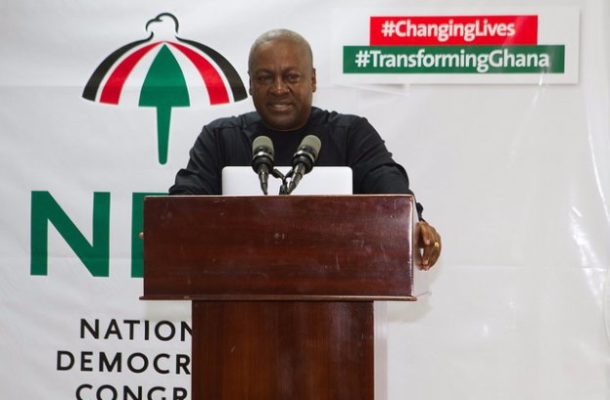 Former President John Mahama has announced of his attention to run for the presidency on the ticket of the opposition National Democratic Congress (NDC) again in the 2020 general elections.

Mr Mahama took to Facebook on Saturday, 19 May 2018, and stated that: “To you the teeming supporters and sympathizers calling and requesting me to declare my intentions for the future, I wish to assure you today, that as a servant-leader, I have listened to your calls and reflected. I will not disappoint you even as we await the publication of the party’s guidelines for selecting a new leader”.He further applauded members and leaders of the party on efforts made at uniting and the reorganisation of the party as they forge ahead with the bid to reclaim power from the governing New Patriotic Party (NPP) in the 2020 polls.“I want to congratulate the rank & file and executives of our party, the NDC, at all levels for the commitment and work rate we have put into our reorganization efforts. The zeal and determination of the average sympathizer of our great party is greater and miles ahead of what it was after the December 2016 Elections. We need to keep up with the momentum generated and follow the published timelines,” Mr Mahama noted.Meanwhile, Ekow Spio-Garbrah, former Trade Minister; Professor Joshua Alabi, retired Vice-Chancellor of the University of Professional Studies, Accra (UPSA); Second Deputy Speaker of Parliament Alban Bagbin and former CEO of the National Health Insurance Authority (NHIA), Sylvester Mensah have declared their intentions to contest the flag bearer slot of the party.