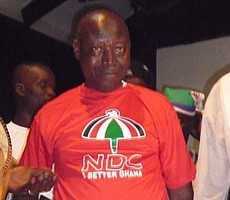 It has emerged that the largest opposition National Democratic Congress (NDC) employed the services of a private institution to collate results of the 2016 general elections to the detriment of party structures.

According to NDC’s Director of Elections, Bede Ziedeng the results that was collated by the system used by the private company crushed compelling the party to revert to the manual system which didn’t really help matters.

Speaking at a press conference in Accra on Thursday, Mr Ziedeng denied claims that the NDC did not collate the 2016 results.

“Unfortunately, it was this infrastructure which crushed soon after it was deployed therefore failed to provide any result for the party and this was alluded to by the Prof. Kwesi Botchwey Committee report. But that does not mean that no results were collated, eventually the party had to fall on the National Election Directorate for the collation of the results.

“On 8th December 2016, the late former Vice President Amissah Arthur sent for the collated results from the election directorate, the collated results of 115 constituencies which was ready by then were delivered to him by the directorate.”
There had been reports that the NDC  could not collate its own results in the 2016 Presidential and Parliamentary elections so as to compare with that of the Electoral Commission.
The move is said to have crippled the NDC’s effort to know how then incumbent President John Mahama was faring in the polls.

Mr Mahama, then flag bearer of the NDC, lost by more than 9% of total votes to the NPP’s Nana Akufo-Addo.

The NDC also lost more than 40 parliamentary seats to the NPP.

NDC’s performance at last year’s polls is its worst since 1992.