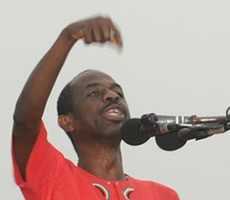 General Secretary of the opposition National Democratic Congress (NDC), Mr Johnson Asiedu Nketiah, is very confident the delegates of his party will re-elect him as the General Secretary regardless the “allegations” some persons are propagating about him.

He told Mugabe Maase, host of Inside Politics on Radio XYZ that although he is being contested for the position he currently occupies, his leadership skills will earn him another term to serve the party.

“They [delegates] will choose me, I believe that… During my tour, some of the delegates even told me if I had not contested they would have stormed my house to assault me…The way they are hungry for power, it’s not about someone’s looks or appearance. The delegates are looking for someone who will lead them to victory,” he disclosed when asked if the delegates were not fed up with his leadership.

He also discounted reports that he will back down, saying “those claims are false reports.”

He said people may want him to lose the elections he will not be distracted by their false claims as far as his aim is to help get the NDC back to power.

“I am not stepping down. There were people who said I was the best General Secretary of the party, some of them are those who say I am a devil meanwhile before today, they were those who came to me and asked for my blessings and endorsement before contesting for their positions. So if you sum up these, you’ll know where the truth lies. Look, no one goes to ask for the devil’s blessings when going to church,” he said but declined to mention any name.

“They say I am a dictator who picks the constitution of the party and amend it to favour myself. And they believe the over 80 executives and Council of Elders look on for me to do what satisfies me?” he quizzed.

Dispelling rumours he has hijacked the party, Mr Asiedu Nketiah explained that he cannot single handedly run the party whereas there are numerous persons as members of the Executive Committee who are made up of officials from every region in the country, 20 Members of Parliament, among other distinguished persons who steer the affairs of the party at the national level.

The two term chief scribe of the NDC further served notice to his critics that truth will always stand no matter how it is shelved, adding that he will not be perturbed no matter how some persons within the party will try to stymie his efforts to retain his position.

His reaction comes at a time he is facing strong opposition from some notable names in the umbrella family over his bid to seek re-election.

Apart from Koku Anyidoho, a former Communications Director for the Presidency under the late Prof. J.E.A Mills’ administration, who is giving Mr Nketiah a run for his money, former Central Regional Chairman of the NDC, Benard Allotey Jacobs seems to be seriously criticizing him.

Allotey Jacobs has on several occasions referred to Mr Asiedu Nketiah as a ‘hypocrite’ and a ‘sycophant’. Others have also described him as a dictator who runs the party as his personal property.

Mr Asiedu Nketiah believes working to get the NDC to wrestle power from the New Patriotic Party (NPP) government in the 2020 general elections is the topmost priority he is focusing on now and not people perceived to be his detractors.

“As I am going round the country for the past three months, I am working towards the success of our delegates congress. I am doing party work so if I get some little time, I campaign for a while,” he added.

Mr Asiedu Nketiah believes the delegates will elect him based on his track record over the years that he has been the General Secretary of NDC.

When asked if the contest between him and his deputy, Koku Anyidoho was fierce, he said” I’m not fighting with anybody. If you plead with delegates to vote for you, how is that a fight?”

“My work is to talk to the delegates and tell them what I can do. They are the ones I’m begging to retain me.”

He said the National Executives, the party leaders and the delegates know what he has done for the party to remain formidable hence victory will surely be his on Saturday, November 17,2018 when delegates meet to elect their national leaders to lead the party in the next four (4) years.