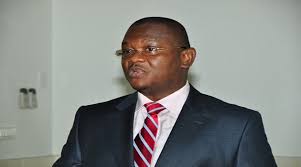 According to the Former boss of the National Health Insurance Authority (NHIA), the NDC as a party is bigger than any individual therefore anyone who wishes to represent the party at the 2020 General elections must go through the normal process.

Stating that he is capable of filling the vacant position and ensuring the party's victory in the next election, Mr. Mensah said; "The NDC is bigger than individual members. Let us not see the flag bearer position as the preserve of any individual. Anyone who aspires to lead the party must be ready to lobby, engage, campaign and present good reasons why he or she must be given the mandate of the party. I see a job to be done, not a position to be filled, and I am ready and capable to do it,”The former La Dadekotopon MP further indicated that there is relative peace in the party, adding that he was pleased with preparations toward the NDC’s national congress as well as its parliamentary and presidential primaries.In an interview with Accra-based Adom FM; he added that; "Our different realities and varied rationalities inform our expectations, ambitions and preferences which generate contradictions and tensions at all levels of the party across the country,"  He urged the party not to gag individuals seeking to serve under the guise of ensuring peace and unity.Mr Mensah urged the party to encourage free expression and healthy competition to complete the re-organisation of the party, and called for all elected delegates as well as those yet to be elected to support his bid.