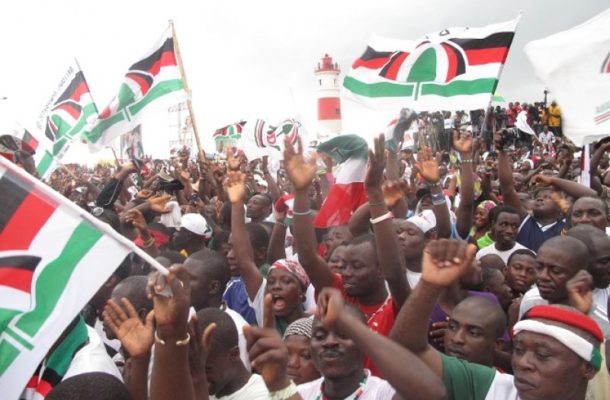 The National Democracy Congress (NDC) has sent a very strong signal of protest to their main political opponents, the New Patriotic Party (NPP), by boycotting the party’s ongoing 26th Annual National Delegates Congress following the dismal of the Chairperson of the Electoral Commission (EC), Charlotte Osei.

Several political parties including the Convention People’s Party(CPP), Progressive People’s Party(PPP), People’s National Convention (PNC), the Independent People’s Party(IPP), the UK conservative party and a host of other smaller opposition parties were at the Conference to lend their support to the governing NPP.

Representatives of the NDC were expected to grace the NPP’s 26th Annual Delegates Congress and give their solidarity message as they have always done in previous events but when their name was mentioned as programmed by the organizer’s, they were nowhere to be found.

This compelled the MCs of the event to assign a reason for their absence, noting that “perhaps, they [NDC) are mourning the late Vice-President of the land, Paa Kwesi Amissah-Arthur”, who was a member of the umbrella family.

Following this, they appealed to the audience to observe a minute of silence in honour of the late Vice-President.

Checks done by Kasapafmonline.com indicate that although the NPP officially invited the NDC to the congress as they have always done and vice-versa, the leadership of the umbrella family alleged decided to boycott the event as a first sign of protest against the removal of the Madam Charlotte Osei from office.

The NDC had wanted to hit the streets of Accra a fortnight ago to register their displeasure about the removal of the Chairperson of the Electoral Commission but their move was hard-hit by the sudden demise of the late Vice-President of the land, Paa Kwesi Amissah-Arthur, who was one of their own.

This compelled them to postpone their intended demonstration until after the final funeral ceremony of the late Vice-President of the land.