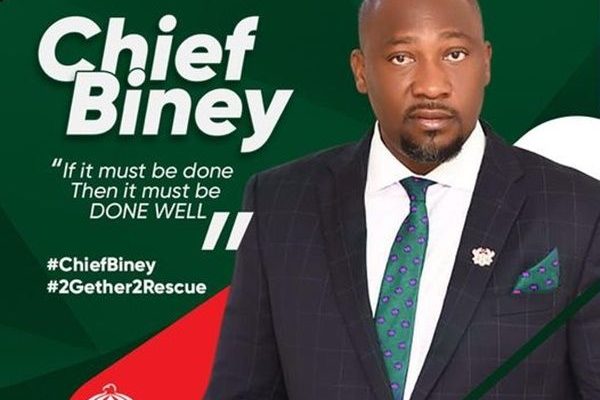 The Deputy National Organizer of the largest opposition National Democratic Congress (NDC), Chief Hamilton Biney, has rekindled the spirit of members of the party and asked them never to relent in their efforts to take charge and rescue the country in this difficult times.

According to him, Ghana is at cross roads in determining the destiny of this country which has been steered off-road by the Nana Akufo-Addo/Bawumia administration.

He noted that there is no time to waste as the ruling NPP has clearly deceived Ghanaians, as such there is a need to sack them from office come 2024 and install a competent NDC government.

He posted in a series of posts on his Facebook page.

Adding that, "Your character will outweigh any lie told about you. Those that know you, KNOW you."#Chieforganiser.

He says Ghanains already know the calibre of the NPP government so there is nothing new for them to show after an abysmal performance since they were voted into power.

Under the hashtag #2gether2rescue and #Ghanamustwork, Chief Biney has been propagating for a positive change in government to help alleviate the hardship most Ghanaians are going through amid the COVID-19 and the Russia/Ukraine War.

Chief Biney has been tipped by many party grassroots to energitically reorganize the party base with his vast experience as a deputy National Organiser to ensure the party comes back to power.

He has been very instrumental in the recent registration exercise that went on across the country.

Is Chief Hamilton Biney seeking to contest for the National Organiser position of the largest opposition party in their soon to be held National Executives Elections in November this year?