NDC's goodwill will help me win power not an individual's- Alabi 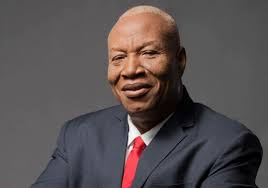 Aspiring flagbearer of the National Democratic Congress (NDC) Joshua Alabi has stated that, he will capitalize on the general achievement of the party to capture power for the party in the 2020 general elections and not the achievement of an individual.

He said,“The NDC from old has built its automatic 45% electoral votes based on the goodwill of the party, for many years. So any Flagbearer is just using the goodwill of the party to campaign. I am going to use the NDC as a party and the good will it has obtained and not any individual’s achievement or whatsoever. Its unfortunate that this benchmark dropped in the last years but I’ll work hard to secure the 45 and the additional 5% plus 1 votes to win elections for my party".

Some dignitaries in the NDC have argued that, the likes of the Professor and other Flagbearership aspirants should rather have allowed the former President John Dramani Mahama to run on behalf of the party based on the grounds that he has been tested and tried by Ghanaians and based on his past achievement, should be allowed to capture power on behalf of the party.

I was these comments that had pushed for the comments Prof. Alabi has made.

According to him, his hardwork will secure the 45% goodwill for the party and an additional 5% plus 1 vote to secure power for the party come December 2020.