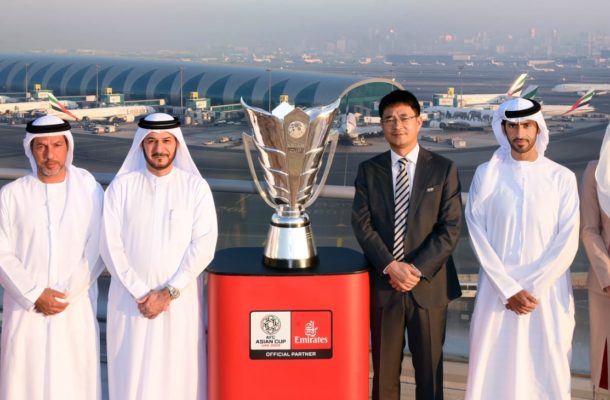 Dubai: After travelling nearly 25,000km across several major Asian cities, the exquisite new AFC Asian Cup trophy has finally landed today in Dubai in the United Arab Emirates – one of the four host cities of the AFC Asian Cup UAE 2019.


Finding its way to the Emirates Group HQ Building at the Dubai International Airport, the new silverware was greeted by representatives from the Asian Football Confederation (AFC), the UAE 2019 Local Organising Committee as well as long-time AFC partners, Emirates Airlines.

AFC Tournament Director Shin Man Gil said: “The trophy tour for the 17th edition of the AFC Asian Cup was truly an epic journey as this was the first time a new trophy has been commissioned in over 62 years of the tournament’s proud history.

“It was vital that we presented fans across the Continent with a once-in-a-lifetime opportunity to relish a rare close-up experience of the authentic and spectacular new trophy and I am pleased to note the overwhelming response from passionate supporters from all walks of life.

“On behalf of the AFC, I would like to express our sincerest appreciation to our host broadcasters – CCTV and PPTV in China, JTBC in Korea Republic, BeIN Sports in Doha, TV Asahi in Japan as well as to our valued sponsors – Continental and Emirates Airlines.”

Adel Al Redha, Executive Vice President and Chief Operations Officer for Emirates said: “We see our partnership with the AFC as an opportunity to connect with football fans in our home, the UAE, as well as audiences across Asia who are cheering on their national teams.

“We are keen to play a major role in bringing fans of football closer to what they love and to build unique opportunities and experiences throughout the AFC Asian Cup 2019. We also aim to further support the UAE’s status as a world-class sports hub and a centre for international sporting events.”

The arrival of the new trophy looks set to build on the momentum of the AFC Asian Cup fever amongst football fans in the UAE as well as travelling supporters and teams, who begin their descent on the four host cities - Abu Dhabi, Al Ain, Dubai and Sharjah - in the coming days.

Commenting at the event H.E Aref Hamad Al Awani, Tournament Director of the Local Organising Committee said: “The championship trophy is a symbol of prestige for any sporting tournament and when people see the marvellous new AFC Asian Cup trophy they will feel pride and recognize that we are hosting one of the top competitions in the world of sports.”