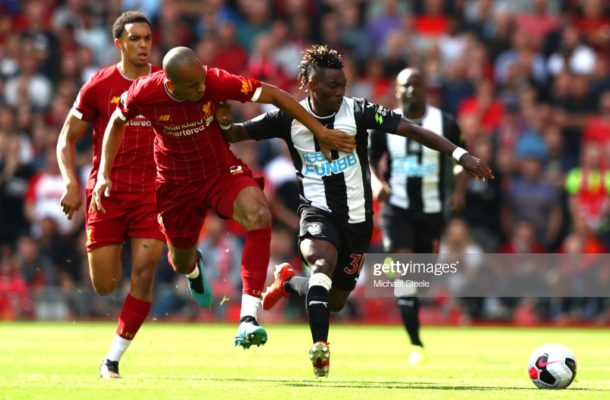 Christian Atsu has been hailed for his performances

Newcastle United winger Christian Atsu has apologized for his mistake in their 3-1 defeat to Liverpool at Anfield on Saturday.

The Ghanaian international played in Jetro Willems for the opening goal but was at fault as Sadio Mane grabbed his second of the game.

Despite the defeat Bet365 bonus code is offering decent odds for the Magpies to finish well in the Premier League this season.

After the match, Atsu acknowledged he was at fault and cost the Magpies a point from the game and said he can 'only apologise' for his lapse of concentration.

"We were in the game – we scored one - then it was unfortunate that I gave the ball away.

"The second goal was very crucial in this game. I can only apologise to the players and also the fans."

The diminutive winger has made an impressive start to the 2019/20 Premier League striking up a good partnership with Willems.

After sitting out the Magpies' opening two Premier League matches of the campaign, the winger made his season debut as a 17th-minute substitute in a 1-0 win over Tottenham Hotspur.

He capped his outing with the assist for the game's only goal and went on to start in the 1-1 draw with Watford in their last match before the international break which has drawn praise from his coach Steve Bruce.

"I've only really seen Christian since the back end of last week because of the stuff with the Africa Cup of Nations and being injured, but as soon as he's come in, he's handled the ball well," said Bruce, who replaced Rafael Benitez as Newcastle manager in the summer.

"Whether it's given him a new lease of life, I'm not sure, but I been very, very pleased with him.

"He's done very, very well. He ran himself to a standstill [against Watford] I have to tell you."

In-between the matches with Tottenham and Watford, Atsu also made an appearance in a League Cup clash with Leicester City.

The 27-year-old will hope to continue his good run when Newcastle play away to Liverpool on the Premier League's return after the international break on Saturday.

He was forced out of the Magpies' opening games due to an injury picked up while on international duty with Ghana at the Africa Cup of Nations in July.