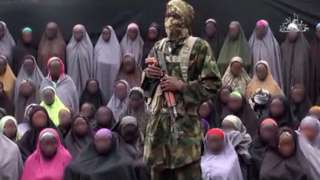 The Nigerian Islamist group Boko Haram has released a video showing some of the schoolgirls they abducted from the northern town of Chibok.

Some 50 girls are shown with a gunman who demands the release of fighters in return for the girls, and says some girls died in air strikes.

The government says it is in touch with the militants behind the video.

Non-Muslims were forcibly converted to Islam, and it is feared that many of the schoolgirls have been sexually abused and forced into "marriage" by their captors.

A leading member of the Bring Back Our Girls movement which campaigns for their release told BBC News after watching the video that she was terrified by what she had seen.

"Everybody should be disturbed by the conditions of the girls," Aisha Yesufu said.

The video begins with a shot of a masked man, carrying a gun, speaking to the camera. He says that some of the girls have been wounded and have life-threatening injuries, and that 40 have been "married".

Speaking in the Hausa language, the gunman says the girls on display will "never" be returned if the government does not release Boko Haram fighters who have been "in detention for ages".

The video concludes with footage of bodies, said to be the victims of air strikes, lying on the ground at another location.

The militant also carries out a staged interview with one of the captives, who calls herself Maida Yakubu, in which she asks parents to appeal to the government.

Maida's mother, Esther, is one of several parents of Chibok girls who recently published

open letters to their daughters detailing the pain they feel at their children's absence and their hopes for the future.

Another girl among those standing in the background can be seen with a baby. Some of the girls can be seen weeping as Maida speaks.

Boko Haram has waged a violent campaign for years in northern Nigeria in its quest for Islamic rule, and a faction of the group recently pledged loyalty to so-called Islamic State, the militant group which controls parts of northern Syria and Iraq.

Thousands of people have been killed or captured by Boko Haram, whose name translates as "Western education is forbidden".

Many of the girls abducted in Chibok were Christian.

Boko Haram has always maintained that the Chibok girls were safe and would only be released if the Nigerian government gave in to its demands.

Through this video, the group is again trying to make the government look like the villain for carrying out air strikes on the militants, which it claims have backfired and hit the abductees instead.

Reigniting public sympathy for the girls might be an attempt to force the government to listen. Boko Haram is attempting to paint the military campaign against the jihadists as a failure.

It is also significant that this video comes shortly after a split in the group, with one faction maintaining that it is the true regional branch of the so-called Islamic State.

The video indicates that the other faction, led by Abubakar Shekau, is the one holding the Chibok girls and so it will use this to show why it cannot be ignored, even if its rivals have foreign backing.

Ms Yesufu said it was "very clear" that the government had "failed in its responsibility to rescue these girls despite promising to do so several times".

"It is also disgusting to realise that it has refused to reach out to the militants," she added.

But Nigerian Information Minister Alhaji Mohammed insisted the government was doing everything possible to secure the girls' release.

''We are on top of the situation," he said. "But we are being extremely careful because the situation has been compounded by the split in the leadership of Boko Haram. We are also being guided by the need to ensure the safety of the girls.

''Since this is not the first time we have been contacted over the issue, we want to be doubly sure that those we are in touch with are who they claim to be."

The video is the first since CNN obtained footage in April purportedly showing 15 of the girls.

The Chibok girls had been thought to be in a heavily forested area of northern Nigeria.

A girl said to be one of those captured, Amina Ali Nkeki, was found wondering in the Sambisa Forest in May by an army-backed vigilante group. But the exact circumstances of what the government initially termed "her rescue" were unclear.