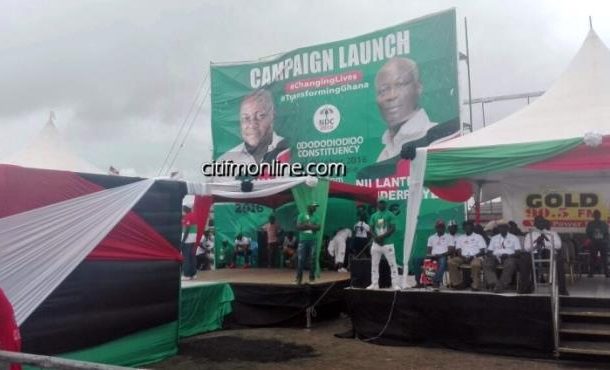 The National Democratic Congress’ (NDC), Member of Parliament for the Odododiodio constituency, Edwin Nii Lantey Vanderpuye, on Sunday launched his campaign at the Bukom Park in Accra. Mr. Vanderpuye, who was elected MP for the constituency in 2012, is seeking another term in Ghana's Parliament after he won the party’s primary in 2015. Some members of the NDC including Deputy General Secretary, Koku Anyidoho, Chief Executive of the Accra Metropolitan Assembly, Alfred Okoe Vanderpuije and the NDC's Greater Accra regional chairman, Ade Coker, were at the event to throw their weight behind him. Citi News' Fred Djabanor reported that, the NDC in the constituency also used the opportunity to launch another version of it’s 'Green Book', this time one which outlined achievements of Mr. Vanderpuye in the Odododiodio constituency.