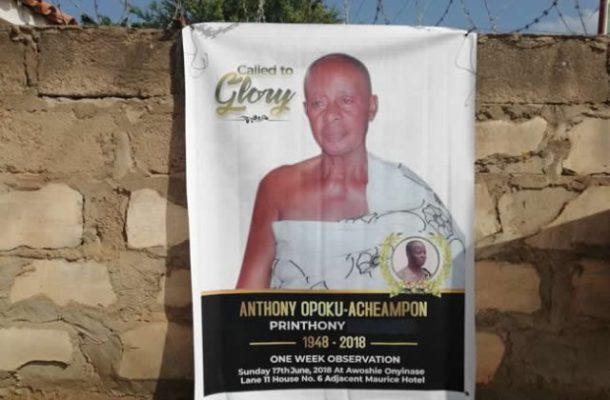 OccupyGhana, a pressure group has described as unacceptable and inhumane, for staff of medical facilities to turn patients away because they do not have beds to admit them.

"OccupyGhana® believes that this “No Beds” excuse is a cowardly cop-out, hiding a much deeper problem assailing Ghana’s healthcare system," a release issued Sunday noted.

The release notes that refusing to admit a patient requiring urgent attention violates the "dignity and respect for life enshrined in the Constitution of the Fourth Republic".

Coomenting on the death a 70-year-old man last week after he was allegedly turned away by as many as seven major health facilities in the national capital, Accra, "OccupyGhana® believes that this “No Beds” excuse is a cowardly cop-out, hiding a much deeper problem assailing Ghana’s healthcare system."

The group therefore has outlined an 11-point it believes when implemented, could impact positively on the country's emergency response system.

Read the statement below:

OccupyGhana® joins the nation in grieving for Mr. Anthony Opoku Acheampong, reportedly refused care at seven hospitals in Greater Accra, due to the phenomenon of “no beds.” His desperate family watched him die in a car in front of Lekma Hospital in Teshie, in the early hours of 10 June 2018.

That, by all standards, is utterly unacceptable. It is also inhumane and goes against every ounce of human dignity and respect for life enshrined in the Constitution of the Fourth Republic. Unfortunately, Ghana’s media is rife with such stories.

OccupyGhana® believes that this “No Beds” excuse is a cowardly cop-out, hiding a much deeper problem assailing Ghana’s healthcare system.

While it may be true that a hospital like Korle-Bu Teaching Hospital, which receives the bulk of emergency cases, may suffer from lack of beds, that does not wash where some of the smaller and private hospitals are concerned.

There may be a variety of reasons for hospitals to turn patients away, legitimate or illegitimate. These can include:
a true unavailability of beds;
lack of the expertise to deal with emergencies due to (i) lack of medical personnel, (ii) medical personnel with inadequate experience to treat said emergency (e.g. trauma) and/or (iii) lack of necessary equipment;
the unwillingness of medical personnel to put in the time and effort to help patients;
the fear that the emergency case will take up much-needed resources for a long time in smaller hospitals;
the fear that the patient would be unable to pay for the care given; and/or
the fear that sub-optimal care given in sub-optimal conditions could lead to a bad outcome and lawsuits against the medical facility and personnel.

But none of these gets at the core issue.

The appalling reality in Ghana today is that the country has no functioning and coordinated Emergency Response System. People who need emergency care simply cannot call for help. Even if they can reach a health facility by telephone, there are only 54 – yes, FIFTY-FOUR – ambulances covering a nation of almost 30 million people.

Ghanaians have no choice but to transport their ill loved ones in cars or taxis looking for a hospital where they will be accepted. We see them in traffic almost every day. The apparently callous reluctance of Ghanaians to get out of the way may be as much due to our selfishness, as it may be due to the public not recognising a taxi blowing its horn as an emergency. It may also be due to the indiscriminate and irritating use of sirens especially by politicians.

In such a scenario, most hospitals could be overwhelmed by emergency cases or even surprised by cases that are uncommon in that facility. It is also quite possible that a lot of time is lost until the right hospital is found or a hospital found with beds, further decreasing survival chances of patients.

There is an immediate need for a functioning and co-ordinated Emergency Response Service with a simple telephone number that every Ghanaian can remember. A recent poll shows that only 5% of the population is currently aware of the emergency number for an ambulance.

The Emergency Response Service should connect the caller to a Command Centre set up to direct calls to an ambulance service that is in touch with all medical facilities, and connect to the police, the fire service and NADMO.

OccupyGhana® calls for an immediate action plan to be drawn up by Government to prepare an Emergency Response Service fit for a 21st Century Ghana, within two years. The following points must be included and fully-funded:
An Emergency Response Service with a Command Centre that fields calls, receives data from the hospitals about bed counts and is able to send out ambulances and paramedics to assist, stabilize and if needed, transport patients to appropriate hospitals. One simple emergency number is what we need;
All hospitals should be able to care for emergency cases, but in the meantime, designate some hospitals as “Fit to Handle Emergencies;”
Government must shore up the NHIS to allow for every Ghanaian to be given emergency care irrespective of the ability to pay;
Hospitals designated as “Emergency Hospitals” should be equipped properly, including the ability to give Triage care. Equipping hospitals also means making sure they are well stocked with needed emergency drugs. This prevents delays in care that occur as family members go around town hunting for drugs to buy so that their loved ones can be treated in emergencies;
There should be more community hospitals that can provide immediate basic primary and preventative care;
The law should prevent hospitals turning patients away without proper reason and a strategy for dealing with that patient’s care in another facility. Facilities and personnel who refuse to offer care to patients with life-threatening conditions should face sanctions;
All doctors and nurses should be trained to stabilise to a basic level emergency patients, irrespective of the availability of beds and full emergency facilities;
Even though lack of beds is not the only factor contributing to the refusal of care to sick Ghanaians at our hospitals, it is an important contributory factor. In a country where in-patient care still trumps out-patient care for a lot of ailments, having 0.9 patient-beds per 1000 people is on the low side. There are several unfinished hospitals like the UGMC that could add much-needed beds to the total count and alleviate some of the pressure. Even though we support the numerous calls to open these hospitals expeditiously, we also call on government to put in place mechanisms to optimize bed usage in the existing ones or else we would simply have more hospitals that refuse care because of “No Beds;”
Enough paramedics should be trained to be help stabilize and transport emergency cases to hospitals;
There should be programs to educate the population on how to differentiate a true emergency from an illness that can be treated non-emergently. A good triaging system as part of an emergency response service should go a long way to help with this; and
Last but not least, we ask for sufficient ambulances to cover a population of 30 million.

We are mindful of the economic challenges posed by this proposal. But that is no excuse. If Ghana can afford hundreds of government 4x4 vehicles and police escort riders to push them through traffic, then Ghana can afford adequate ambulances to deal with emergencies, AND address our list of points made here.

The tragic and unnecessary death of Mr. Anthony Opoku Acheampong is already blood on our hands. Let us not indict ourselves further; this should be the catalyst for finally building a Ghanaian healthcare service of which we can all be proud.

It is time for Ghana to have a 21st Century Emergency Response System. It is time for the government to ensure this, for medical personnel across the country to deliver the best version of it and for the Ghanaian population to demand it as of right.
.

Yours in service of God and Country.