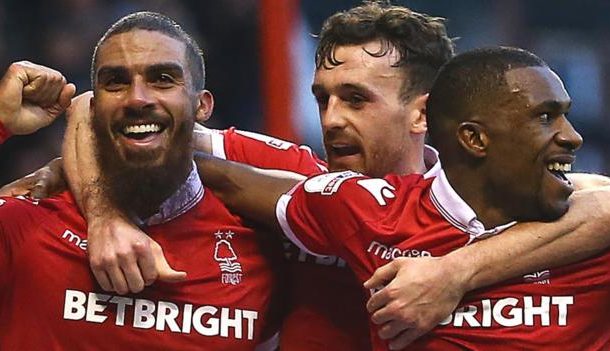 Nottingham Forest will start the match one point outside the play-off Championship placesFollow live text coverage on Saturday on 14:00 GMT

Nottingham Forest have defender Tobias Figueiredo back from suspension for the visit of QPR, managed by ex-Forest boss Steve McClaren.
Danny Fox (foot) could also return but experienced centre-back Michael Dawson (hamstring) is still out.
QPR, who have never won in 34 previous visits to the City Ground, remain without Geoff Cameron (ankle).

However, fellow defender Joel Lynch (dead leg) should be fit enough to play against his former club.
Match facts

Nottingham Forest are looking to record three consecutive league victories against QPR for the first time since January 1998.
QPR lost both of their league games against Nottingham Forest last season, conceding a combined nine goals across those meetings (0-4 away and 2-5 at home).
QPR have never won away at Nottingham Forest in all competitions (D14 L20) - the most a team has played away at another without ever winning in all competitions in English football.
Nottingham Forest have lost just two of their past 14 home league games (W7 D5), although those defeats have come in the last five at the City Ground.
This will be the fifth Championship meeting between Nottingham Forest boss Aitor Karanka and QPR's Steve McClaren - Karanka has won each of the past three without conceding a goal, all as Middlesbrough manager against McClaren's Derby County side.
After failing to score in 27 consecutive league appearances (including play-offs), QPR striker Nahki Wells has found the back of the net in five of his last nine.