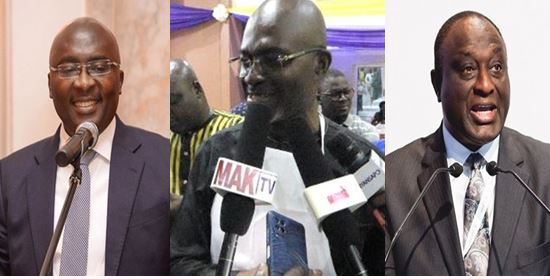 The Member of Parliament (MP) for Assin Central Constituency in the Central Region, Kennedy Ohene Agyapong is very courageous going into the impending NPP presidential primaries.

The lawmaker and businessman has made it very clear that he would be contesting in the New Patriotic Party’s flagbearership race. "I will go and pickup forms when NPP opens nominations for presidential aspirants." He told MAK TV in an interview.

The Vice President, Dr. Bawumia and Trade Minister Alan Kwadwo Kyeremateng, are the key contenders for the NPP’s flagberarership race.

Despite gaining momentum in recent months, many believe that the fortunes of Kennedy Agyapong could be ruined by Alan or Bawumia.

However, Kennedy Agyapong is very optimistic that he will be NPP’s flagbearer ahead of the 2024 general polls.

According to him, he is not afraid of any contender, be it Baumia, Alan or whatsoever.

I'm not afraid of Alan and Bawumia. Because at the end of the day, we're all going to campaign on whatever each of us has done for the party. I know I've done a lot of things for NPP, and I believe the grassroots will consider that and vote for me. " He stated this in an interview with MAK TV.

A lot of Ghanaian youths are yearning for Kennedy to become Ghana's president in 2024.

The NPP is also looking forward to ‘Breaking the Eight’ but Kennedy believes that, the party can only break the 8 if only delegates give him the power to lead the party in the upcoming Ghana’s 2024 general elections.

"If NPP wants to win in 2024, then the delegates must think about the youth because a survey conducted suggests that about 88 percent of the youth want me to be President, so that should be a message to the polling station executives and all the delegates." He stated.
Watch video Below