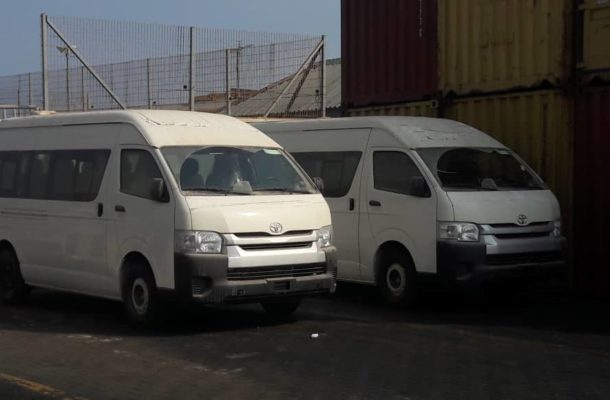 The vehicles are expected to used for commercial transport service and the proceeds would be used to finance the activities of the 275 constituencies where the party has representation.

Speaking to Journalists at the Tema Port after taking delivery of the buses, Spokesperson for the Acting Chairman of the NPP, Richard Nyamah, said the decision by Freddie Blay’s Campaign to acquire the buses for the 275 constituencies is motivated by his quest to ensure that the constituencies generate revenue on their own and not rely on government or the party leadership for their survival.

He reiterated that the buses would be managed by the State Transport Corporation (STC), a decision which is essentially to ensure that the buses are managed professionally and to guarantee maximum profitability.

But addressing the press in Accra, Mr Stephen Ayesu Ntim who is contesting the National Chairman position for the record fourth consecutive time, stated that he’s not moved by Freddy Blay’s actions intended to influence delegates to vote for him.

“I did not donate my 14 buses to the party two days to elections to buy votes, it was a need that I identified in the party and I did not promise. Before they realized the vehicles had been sent to the regions to work for the party and not that  vote for me and I’ll give you a pick up or take a bus and vote for me. That is synonymous to vote buying and I’m not interested in doing such, this is not going to disturb me. Furthermore, our party people are ready to reward loyalty, hard work and commitment, I don’t think these buses or other material incentives is what they’re looking for. Some of have demonstrated this in time past when there were no resources, I did 14 cars without telling them to vote for me before giving them the buses. So I’m not perturbed at all, I believe in the good judgment of delegates.

“Why is it that during the 2016 campaign he didn’t bring 275 pick ups, I’m talking about pickups not even buses. But you wait until you say vote for me and get these buses. That amounts to vote buying, but if these items had arrived by 2014, 2016 I would have said this is with good  good conscience but not when you’re looking for votes.