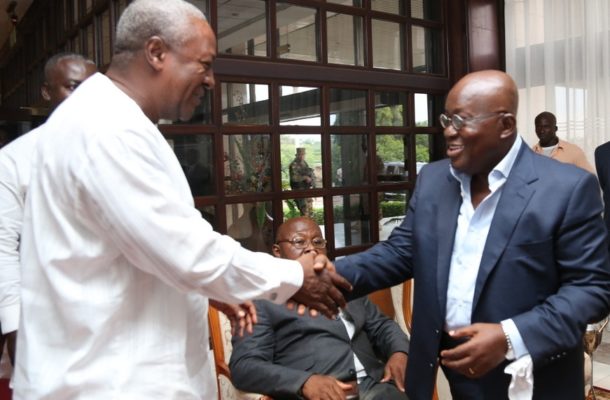 Former president John Mahama has expressed shock over a claim by the Akufo-Addo government that the 2017 allocation of the one million dollars per constituency per year expired with the budget of December 2017.

Responding to a question posed by the Member of Parliament for Mion, Mohammed Abdul-Aziz, when government would release the Cedi equivalent of one million dollars to every constituency, the Minister for Special Initiatives, Mavis Hawa Koomson, said the money technically expired with the budget in 2017 as the structure needed to implement the programme was not available.

But former President Mahama is wondering how a million dollars per constituency meant for the development as promised by the New Patriotic Party (NPP) in the 2016 elections could expire.

Mr Mahama, who is on a three-day campaign of the Upper East Region, expressed shock when he addressed delegates of the National Democratic Congress (NDC) at Zuarungu, in the Bolgatanga East constituency in the Upper East region.

Mr Mahama pointed out that with two months left for the year to end, time is running out for that allocation to also expire. He said Ghanaians have now seen through the lies and deceit of the NPP, noting that such lies and deceit could shake the faith of Ghanaians in the democratic system.

Mr Mahama also called for unity in the NDC following the elections of new executives at the constituency and regional levels, and promised to work hard to reduce the high cost of living in the country.