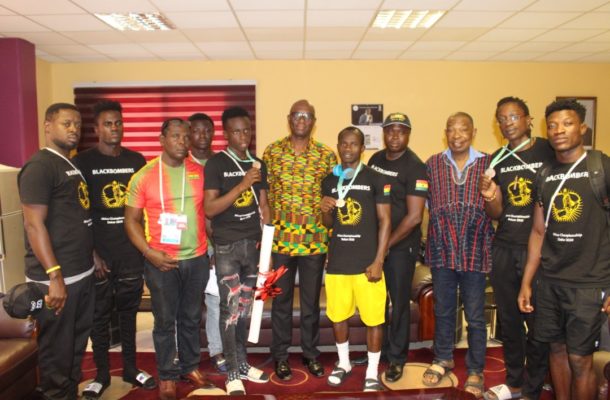 The National Sports Authority (NSA) has congratulated members of the Ghana Amateur Boxing team, the Black Bombers that secured qualification to the Tokyo 2020 Olympic Games.

The Authority also commended the national U-17 female national team, the Black Maidens for defeating Liberia over the weekend in a FIFA World Cup qualifier in Monrovia.

A statement from the NSA signed by the Ag. Head of Public Relations, Mr Charles Amofah, urged the two teams to remain committed to their respective disciplines and train hard to achieve their targets.

In a related development, the other boxers who failed to qualify, according to the Ghana Boxing Federation (GBF) will have another opportunity at the upcoming Olympic qualifiers to be held in France later this year.
The Black Maidens, however, recorded a 2-0 victory over their Liberian opponents to be in pole position ahead of the second leg encounter between the two nations.

According to the NSA statement, both boxers as well as the footballers have done the Nation very proud but this is only the first step of a long journey ahead.'

"With the 2-0 cushioning, we have no doubts in our minds about your ability to qualify to the next stage of the competition.

According to the statement, with discipline and dedication, they can pull through and advised the boxers to remain focused on the upcoming event.

Meanwhile, the Black Bombers have called on Mr Saka Acquaye and Mr Majid Bawa, the two Deputy Director Generals of the NSA.

The visit was to appreciate the NSA’s gesture for the team's participation in the qualifiers as the NSA pledged it's unflinching support for the team.