Nyantekyi WILL seek re-election as GFA President in 2019 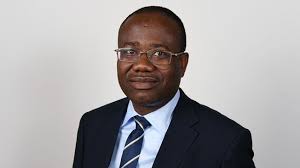 Executive Committee member of the Ghana Football Association (GFA) Wilfred Osei Kweku Palmer has disclosed that Kwesi Nyantekyi will seek re-election as president of Ghana FA when his current mandate expires in 2019.

Although Nyantakyi, has reiterated on a number of occasions that he would not contest in the upcoming elections after becoming the association's chief in 2005 when he replaced Dr. Nyaho Nyaho Tamakoe.

Osei Palmer strongly asserts that CAF’s 1st Vice President will change his mind because he still has the backing of the majority at the FA.

“Kwesi Nyantekyi will seek for re-election, I can say that for a fact”

He also condemned Vice President George Afriyie for coming out publicly to declare his intention to contest the elections without consulting his boss.

“The place where George made his declaration was wrong, he ambushed the people who went there”

“George Afriyie should apologize to EXCO for his declaration “