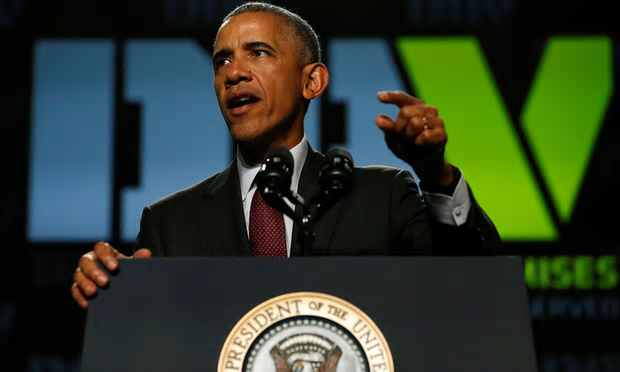 Barack Obama has intervened  the furore over Donald Trump’s criticism of a Muslim couple whose son was killed in Iraq, telling disabled war veterans that “gold star families have made a sacrifice that most of us cannot even begin to imagine”.

The president did not make explicit reference to Khizr and Ghazala Khan who condemned the Republican presidential nominee at last week’s Democratic convention and in a series of TV interviews, prompting Trump to lash out, but there was little doubt whom Obama was targeting as he addressed the annual convention of the Disabled American Veterans in Atlanta.

“Let me say this,”  said Obama. “No one, no one, has given more for our freedom and our security than our gold star families [those whose family members died in service]. Michelle and I have spent countless hours with them. We have grieved with them."

From ‘vehemently oppose’ to ‘all in’: explore the universe of positions on Donald Trump. See which politicians have been sucked into orbit and which ones are resisting the pull

At the Democratic convention in Philadelphia, Obama continued, he was “humbled” to be introduced by Sharon         , Belkofer, whose son, Tom, a lieutenant-colonel in the army, died in Afghanistan. She got a laugh by beginning: “You’re all probably wondering: who the heck is this sweet little old lady?”

Obama said carefully and with emphasis: “I requested Sharon introduce me because I understood that our gold star families have made a sacrifice that most of us cannot even begin to imagine. They represent the very best of our country. They continue to inspire us every day, every moment. They serve as a powerful reminder of the true strength of America. We have to do everything we can for those families and honour them and be humbled by them.”

The remarks were met by enthusiastic applause. The Khans’ son, Cpt Humayun Khan, was killed in a truck bombing in Iraq in 2004. In an interview with NBC’s George Stephanopoulos on Sunday, Trump suggested that Ghazala Khan had remained silence at the convention because of her religion.

Trump’s campaign has remained largely silent on the growing outrage following his comments, save for a pair of tweets sent on Monday morning in which Trump declared that “this story is not about Mr. Khan ... but rather RADICAL ISLAMIC TERRORISM and the U.S.” and sarcastically called Khizr Khan’s statements “Nice!”

But at least one senior campaign official has lifted a conspiracy theory from the darkest fringes of the internet to accuse Khizr Khan of being a “Muslim Brotherhood agent”. Veterans adviser Al Baldasaro tweeted an article published on shoebats.com a far-right conspiracy site that speculates that Humayun Khan, who emigrated to the United States at the age of two and was awarded the Bronze Star after his death, was a “Muslim martyr” who was only killed “before his Islamist mission was accomplished.”

Since 2009, Obama has issued annual proclamations designating the last Sunday in September as gold star mothers and families day. Gold star families were invited to the White House for a special screening of Star Wars: The Force Awakens last December. The nearly 21 million veterans in the US make up a potentially crucial voting bloc.

On Monday, the president made other pointed comments at the expense of Trump, who has praised Saddam Hussein for killing terrorists, branded the US military a “disaster” and questioned the Nato alliance while expressing admiration for Russian leader Vladimir Putin.

“To all of you who served in Iraq, we saw your heroism in pushing out a dictator – whose brutality must be condemned, never praised – in defeating an insurgency, in giving the Iraqi people a chance,” Obama said. “And no matter what has happened since, your valour in the deserts, in fierce urban combat, will be honoured in the annals of military history.

“Let me say something else about this generation. As commander-in-chief, I’m pretty tired of some folks trash-talking America’s military and troops.”

The US still has “the most capable fighting force in history”, he added, “and we’re going to keep it that way”.
Advertisement

Obama promised that the US would continue pounding Islamic State, taking out its leaders and shrinking its territory. “And united with a global coalition, we will destroy this barbaric terrorist group. They will be destroyed,” he said.

He added: “In the face of Russian aggression, we’re not going to turn our back to our allies in Europe. We’re going to stay united in Nato, which is the world’s strongest alliance.”

Obama told the audience that veteran homelessness has been cut by 47%, though this is still short of the target of eradicating it by 2015. He credited the Affordable Care Act for improving veterans’ healthcare and said systems at the long-troubled Department of Veterans Affairs are finally “moving into the 21st century”.

The president praised the hard work of the veterans affairs secretary, Bob McDonald, who gives out his mobile phone number and email address. “Not many people know this, but so far he has received more than 45,000 calls, emails and texts,” Obama said. “I don’t know what his phone bill is looking like. I hope he has a good plan.”